Cardiothoracic Surgeon Dr. Zane Atkins of the South Texas Cardiothoracic and Vascular Surgical Associates is ushering in a new wave of care to the San Antonio community.

A North Carolina native, Dr. Zane Atkins has traversed the globe and accumulated a wealth of experience that has furthered his ability to care for his patients and the San Antonio community at large. Born on the eve of the 1970s, the young Zane Atkins was destined for a life of treating and traveling, unbeknownst to him.

“My first rotation was in surgery, and I fell in love with it. All of the intricacies, the challenges, it was all of it that drew me in” -Dr. Zane Atkins

In May of 1995, Dr. Atkins graduated with his medical doctorate and immediately began his successful track record of post-graduate work. Only a month later, he began his one year internship in surgery at Duke University’s department of surgery, followed by a year as a junior assistant resident.

“My first rotation was in surgery, and I fell in love with it. All of the intricacies, the challenges, it was all of it that drew me in,” Dr. Atkins recalled.

Gaining this experience, Dr. Atkins then spent roughly two years as a research fellow with the National Institutes of Health and subsequently went on to become a senior assistant resident and Chief Resident in General Surgery. The research aspect was invaluable, Dr. Atkins explained, because it allowed him to get direct hands-on experience with the field that he had chosen. In his fourth year, Dr. Atkins was applying for residency programs approved through the Air Force. Thankfully, during that time, the Air Force needed surgeons and they gave him a deferred status, allowing him to apply to any residency program he chose—ultimately surgery at Duke University. 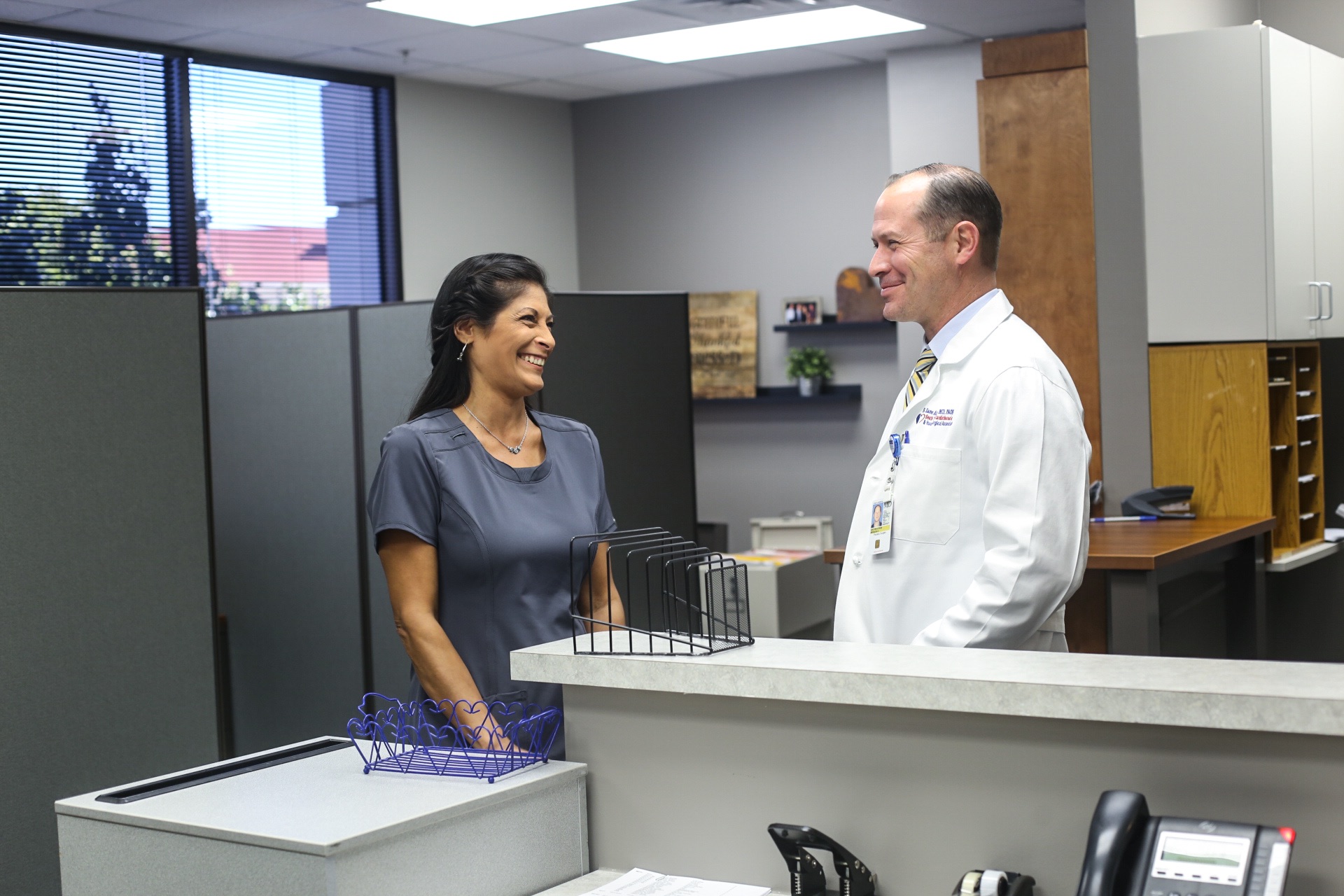 After finishing his surgery training, he applied to enter cardiac, but the timing and manpower weren’t directly inline to allow him to enter right then. Accepting this, Dr. Atkins relocated to San Antonio in 2002 to be a faculty member at Wilford Hall Medical Center in general and vascular surgery. As with many major military treatment facilities, Wilford Hall has an affiliation with the military medical school in Bethesda, Maryland, and faculty members can apply to be adjunct faculty members, which Dr. Atkins did. From 2002 unto recently in June of 2016, Dr. Atkins was an adjunct professor of surgery at the Uniformed Services University of the Health Sciences.

After leaving Wilford Hall, Dr. Atkins returned to Duke University in 2004 for his cardiothoracic training in a three year program. Following his extensive training over the course of a decade, Dr. Atkins would return once more in 2011 for advanced training in heart transplants and mechanical circulatory support, which is his chief focus today in helping patients with heart failure, transplants and heart pumps, amongst other circulatory supports.

In 2007, he was assigned to Keesler AFB in Biloxi, Mississippi. In September 2008, Dr. Atkins was deployed to Balad Air Base, formerly Saddam Hussein’s airbase, in Iraq with the 332nd Expeditionary Medical Group on a thoracic surgery deployment billet. All evacuees from the Iraqi theatre were required to go through Balad, and this created the need for thoracic surgeons. Dr. Atkins and his team were charged with ensuring that refugees fleeing the conflict were in good health before they were sent to Germany or the U.S.

“In the deployed environment you learn to be flexible and to do things with a team that may not be fully familiar with each other and how they each work” -Dr. Zane Atkins

His experiences in the military and from his deployments has undoubtedly shaped how Dr. Atkins practices medicine today. One chief aspect of this is the necessity of adapting to an ever-changing, or potentially imperfect environment or situation.

“In the deployed environment you learn to be flexible and to do things with a team that may not be fully familiar with each other and how they each work,” Dr. Atkins explained.

Working with an array of ever-changing personnel, the deployed environment, and military at large, shifts how one works with procedures they may be familiar with but a team member may not. The experience in the military showed Dr. Atkins the need to immediately come together to get the job done, and he still pulls from this today. Naturally, in some cases individuals feel that they may not be able to accomplish a goal or objective without a requisite piece of information or tool, but as Dr. Atkins explained, the deployed environment requires surgeons to employ ingenuity in potentially working without all desired tools or situations. The mainstay in these scenarios is the dedication to ensuring that the patient receives superior care, despite any situational or equipment setbacks.

Alongside ingenuity comes the physical stamina and extensive practice needed to successfully perform procedures. Though surgery may not seem physically demanding, it is in fact both mentally and physically taxing. Tasks like standing for eight hours on end at a heart surgery, which is required in many cases, while maintaining a level of clarity and mental focus are not easy feats nor for everyone.

“The field almost self-selects for those who are detail oriented and can demand almost perfection from themselves in every situation because ‘Good Enough’ isn’t good enough in heart operations,” Dr. Atkins shared.

Indeed, the field is so meticulous that it is known and shared amongst physicians that even in routine heart operations there are roughly 120+ individual steps from the start of the skin incision to the closure of the incision.

“The thing about heart surgery,” Dr. Atkins shared, “is that every step has to be done perfectly to guarantee the best result,”

The demanding nature of the field would almost seem to attract practitioners that are familiar with the nature of practicing before performing, much like professional athletes or musicians. Surgery is very similar, Dr. Atkins explained. Physicians spend copious amounts of time practicing and training, and on occasion, learning physicians are allowed to perform. Though much like professional athletes, once out of training surgeons are expected to perform at their best.

“I think even for the practicing physician in the community, we should have an expectation that that individual spends their time focusing themselves on getting better and better, much like the athlete or musician,” Dr. Atkins expressed.

In January 2012, the military unveiled their own heart program located at Travis AFB in California. This led Dr. Atkins to depart Durham, North Carolina, where he had worked with the VA system for four and a half years under his mentor Dr. Walter Wolfe, a leading thoracic and cardiac surgeon in the country. During his time in Durham, Dr. Atkins developed as a young surgeon and aided in training residents from Duke University. Then-Lieutenant Colonel Dr. Atkins departed Durham for Travis AFB in California to become the 60th Surgical Operations Squadron Chief of cardiothoracic surgery at David Grant USAF Medical Center. The program is the sole standalone heart program run by the Air Force.

David Grant USAF Medical Center has a long-standing relationship with the University of California-Davis, and the university was interested in starting a destination left ventricular assist device program (LVAD) that Dr. Atkins helped begin; the program was awarded Joint Commission Certification in 2014.

“It [the program] is really successful and one of the few that has started from scratch and not been affiliated with a heart transplant program,” Dr. Atkins shared.

“I believe we have the talent to deliver, and that makes it a really exciting opportunity” -Dr. Zane Atkins

Following four and a half years at Travis AFB, Dr. Atkins’ military career was officially over, and in June 2016, Dr. Atkins separated from the Air Force as a full-bird colonel. Naturally, after his separation Dr. Atkins began searching for potential career opportunities that would allow him to continue practicing his specialties, and he opted to begin working with the South Texas Cardiothoracic and Vascular Surgical Associates in San Antonio. As a member of the Society of Thoracic Surgeons, Southern Thoracic Surgical Association, and David C. Sabiston, Jr. Surgical Society, among others, Dr. Atkins brings his unique skillset and experiences to the South Texas Cardiothoracic and Vascular Surgical Associates. Given his varied experiences and dedication to provide exceptional service, it’s no wonder Dr. Atkins opted to bring his skillset to the Alamo City.

“I think my experience in and because of the military helped give me a certain level of well-roundedness that has made my transition easier than imagined,” Dr. Atkins said.

“I think San Antonio is a gold mine in what we’re capable to do to modernize the delivery of cardiovascular care, not only on the heart failure side of things but for heart valve therapy, aortic surgery and minimally invasive approaches to heart surgery in general” -Dr. Zane Atkins

As a decorated physician and Air Force officer, Dr. Atkins has demonstrated that extraordinary is his everyday protocol. Indeed, Dr. Atkins has been awarded the Meritorious Unit Award, the Meritorious Service Medal and Meritorious Unit Service Medal, among many others. In looking for a post-military career, Dr. Atkins’ main focus was finding a robust heart failure program that allowed him opportunities to perform heart transplant and ventricular assist device therapy, and the city of San Antonio, Dr. Atkins felt, was a great opportunity because of the size of the community and the opportunity to grow the heart failure program.

“I think San Antonio is a gold mine in what we’re capable to do to modernize the delivery of cardiovascular care, not only on the heart failure side of things but for heart valve therapy, aortic surgery and minimally invasive approaches to heart surgery in general. Maybe even more importantly, the chance to collaborate with our colleagues to streamline care and to offer the most modern care and products to the people of San Antonio,” Dr. Atkins explained enthusiastically. “What I would really like, is for our us to be considered in the same line as the Cleveland Clinic, medical centers in Houston, Chicago, and all around. I believe we have the talent to deliver, and that makes it a really exciting opportunity.”

From North Carolina to Iraq and back, Dr. Zane Atkins has travelled the world and country in his mission to perfect his craft and provide patients solely superior healthcare. With a well of experience and a dedication to exceptionalism, Dr. Zane Atkins is undoubtedly changing the face of cardiothoracic care in the Alamo City. Working with the South Texas Cardiothoracic and Vascular Surgical Associates, Dr. Atkins is bringing a new wave of care to the South Texas region that will alter and bolster the community at large.