Most of you probably remember the food pyramid from grade school. Did you know the pyramid design was retired in 2011 for a dinner plate? Have you given any thought as to why the food pyramid was created in the first place? Was it truly healthy? And how did the USDA arrive at choosing what Americans should eat?

In 1968, Senator George McGovern was deeply moved by a television documentary on starvation in America. McGovern promptly went to work in Congress to abolish hunger in the United States, and he was named Chairman of the Senate Committee on Nutrition and Human Needs. Shortly after embarking on this journey to end hunger, McGovern became acquainted with low-fat guru, Nathan Pritikin. Almost immediately, the vision changed from starvation to saving Americans from heart disease, diabetes and obesity through the vehicle of a low-fat diet.

With this goal in mind, a committee was formed by Congress and charged with developing nutritional guidelines for Americans to help mitigate chronic disease. The committee was made up of nutritional scientists who did their job nicely. The original recommendation that was returned to Congress “cracked down ruthlessly on empty calories and health-depleting junk food. The new guide’s base was a safari through the produce department – five to nine servings of fresh fruits and vegetables each day.?Protein food? like meat, eggs, nuts and beans came in at five to seven ounces daily: for dairy, two to three servings were advised,” according to Denise Minger’s work “Death by Food Pyramid.”

But it’s nothing like the food pyramid of old that we remember, the one with the foundation built on breads, pastas, cereals and rice.

So what happened? Why the change if this is what the nutritional scientists discovered?

When the committee brought its original findings and food pyramid before Congress they were told there was no way the USDA could tell Americans to eat this way. It was much too expensive. Ironically, this was during the early 1970s when welfare programs were gaining traction within the government. Not to mention various special interest groups, like the grain and rice industries, balked at it completely. The nutritional scientists were told to take it back and rework it, make it affordable to the average American. With a few tweaks by the scientist and the USDA — making sure all interested parties got their fair share — the birth of the food pyramid came to pass. 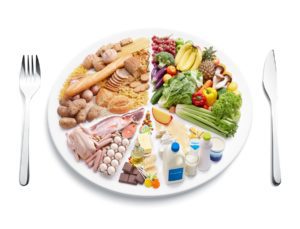 Fast forward some 40-odd-years under the guidance of the USDA food pyramid, Americans face obesity, diabetes and heart disease in near-epidemic proportion. The USDA revised the nutritional guidelines, albeit ever so slightly. In 2011, this changed the diagram from a pyramid to a dinner plate, in hopes to give Americans a better image on portion selection. However, it remains as much a political as a public health document. It gives way to the same bad science and special interests that its predecessor did. Rest assured neither the pyramid nor the plate has Americans’ weight and health in mind.

There seems to be a slow-moving shift within some factions of the medical community, as well as the nutrition industry, from thinking that eating fat makes you fat and cholesterol is the devil, to carbohydrates and sugars are far more evil than fat. I believe this to be true and have had great personal success with aligning my diet with that theory.

There is such an abundance of nutritional and health information at our fingertips these days that it is often hard to determine fact from fiction. Keep in mind that science is constantly changing. Things that were taught as fact 20 years ago may be obsolete today. If you are interested in learning more about the science behind nutrition, without feeling as if you are reading a textbook, I encourage reading: “Why We Get Fat and What to do About It” by Gary Taubes, “The Art and Science of Low Carbohydrate Living” by Jeff Volek and Stephen Phinney, and the aforementioned “Death by Food Pyramid” by Denise Minger. If you fail to educate yourself on the science of nutrition, you will be easily fooled by the pseudoscience of those with special interest.