It’s a quarter past 5 o’clock on a Friday afternoon. While the typical business day ended about 20 minutes ago, ophthalmologist Lisa Martén and her staff steadily work through the evening, re-training and re-hashing the protocols of normal procedures, and furthering their knowledge on the newest technological advancements in eye care.

Naturally, success isn’t measured by blips of excellence, rather, it is achieved through consistent performance where brilliance is the norm and the only allowable trajectory is forward.

For the better part of a decade, the South Texas Eye Institute, under the guide of Dr. Martén, has persistently proven their impassioned dedication to their patients and toward improving themselves to offer only the best service at all times. Established in 1987, the South Texas Eye Institute was the initial eye care provider to offer Lasik — an acronym for laser-assisted in situ keratomileusis — procedures to Alamo City residents. Building on this foundation, Dr. Martén continues to usher in the wave of health-related technologies to better serve her patients.

“Just since I started, we now have laser-assisted cataract surgery, and we have all this equipment that can detect eye disease way earlier than we could ever see before” – Dr. Lisa Martén

The first eyeglasses are believed to have been invented in 13th-century Italy, and the first contact lenses are purported to have been crafted from hand-blown glass toward the latter end of the 19th century. Needless to say, modern medicine has made exponential improvements in eye care in a relatively small amount of time. The rate of technological advancement is truly mind blowing. “Just since I started, we now have laser-assisted cataract surgery, and we have all this equipment that can detect eye disease way earlier than we could ever see before,” explains Dr. Martén.

Citing these advances, Dr. Martén details that now ophthalmologists are able to detect glaucoma, corneal disease and a host of other afflictions much sooner than previously possible. This is partly because “cameras are reaching the very the edge of the retina now, where as before they couldn’t do that without distortion. They are also showing the different layers of tissue and have advanced software to evaluate the risk for disease.”

The advances in ophthalmology can largely by seen in three areas explains Dr. Martén. The improvements in technology, medicine and surgery have propelled the way ophthalmologists, like Lisa Martén and her staff, are able to treat and assist patients. And, as one could surmise, the advances in one area necessitate and facilitate the progression of another. 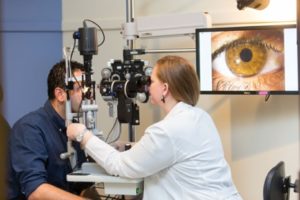 An example Dr. Martén gives is the lenses employed in cataract surgery. “We’re able to get it where people are able to see distances intermediate and up-close without having to wear glasses, where as before when you had cataract surgery in the ’80s you barely were getting an implantable lens, and in the ’70s they didn’t put lenses in your eyes,” details Dr. Martén.

Indeed, it was in the late ’70s into the ’80s when implantable lenses made their large public debut, but it wasn’t until the ’90s that corrective implantable lenses were advanced to have different properties to allow patients to see up-close.

While this sort of procedure may sound expensive, it is important to consider that patients would likely end up purchasing glasses on a yearly basis, and when compared, this one-time surgery would serve all the purposes that glasses would cure and would only be needed once. This advancement is a marked improvement from treating a condition to, nearly, permanently resolving it.

Though implantable corrective lenses are just one aspect of the advances made in ophthalmology. In the realm of medicine, glaucoma patients can belay their worries of the dreaded red-eye stigma. As most are aware, there used to be a stigma and suspicion surrounding glaucoma sufferers.

The bloodshot eyes have proved a persistent, occasionally humorous, characterization of this affliction. Where glaucoma drops would previously cause redness of the eyes, leading to accusations of intoxication, today “there are a number of newer medications for patients to treat their glaucoma without having all of these side effects,” says Dr. Martén warmly.

The arena of surgery has seen its fair share of advances as well. An ophthalmologist’s, much like any other profession’s, tools are of the utmost importance in order to achieve the desired end goal. And surgery, as the saying goes, is always a serious matter. Today’s microscopes themselves have advanced to incorporate an overlay of patients’ eyes in the ocular of the microscope.

This means that while Dr. Martén is performing surgery, she is also viewing a digital overlay of a patient’s eye to better see where exactly to line up the lens. “Coupled with doing laser-assisted cataract surgery and a fancy lens, it’s amazing how patients are able to see afterward,” shares Dr. Martén with a smile.

Alongside this, Dr. Martén tells that the FDA has recently approved an in-lay for the cornea that is intended to correct presbyopia, the natural deterioration of eye sight that necessitates reading glasses, and give patients reading vision.

Every advance that Dr. Martén and the South Texas Eye Institute make is noted by her large patient base. Indeed, patients frequently remark on seeing new equipment in the office and will inquire about it, but Dr. Martén much more prefers to show them how the new technology can help them.

There’s something about seeing your eyes captured on camera that is mesmerizing. Of course, any time one looks in the mirror they could catch a glimpse, but to truly see them enlarged and in detail is captivating and frequently aids in illustrating eye health discussions with patients.

“They love to see their eyes on the screen…we have the cameras in the room where we can take pictures of the surface of the eye and the retinal cameras to show them the back part…basically, anything that’s wrong with their eye we can show it to them,” beams Dr. Martén proudly.

Putting a picture to a real affliction carries much more impact for the patient and ultimately helps with compliance. With these cameras you’re able to mark and show improvement over time, and this “really brings it home for the patient, and they’re able to see what is actually going on with their eyes.” This kind of technology leads to patients being more excited about their exams, and being able to see and better understand what is happening with their health.

With all of these advancements, one must wonder how has Lasik surgery improved over time. When visiting and conversing with Dr. Martén for the first time, it was impressive to note that she would occasionally have to excuse herself to perform a Lasik procedure. While some may think that it is a relatively long procedure, Lasik has always been a comparatively quick medical procedure.

“Usually you’re in and out of the operating room in about 15-20 minutes, and the actual laser time is usually less than a minute,” says Dr. Martén with her signature warm grin.

“I was always taught in residency, if you have a doubt see the patient”– Dr. Lisa Martén

The actual advancements that have been made in Lasik are the speed of the laser itself, and the technology of the laser and how it treats the eye. Indeed, the laser that the South Texas Eye Institute uses now can make a cut in about 15 seconds, where as five years ago it may have taken a minute.

“It takes much longer to actually set up than to actually do the procedure,” explains Dr. Martén jokingly. In truth, Dr. Martén shares that the hardest part is not necessarily the surgery but the pre- and post-op work required before administering Lasik for a patient.

Keeping San Antonians’ care at the forefront of her mind, Dr. Martén explains that the South Texas Eye Institute has an open-door policy for patients. So even five months after surgery, a patient can always call and they will always be seen. Dr. Martén is known to come in outside of typical office hours on a Saturday or Sunday to see patients and examine their concerns. Sometimes it’s a simple consultation or addressing a common post-op question, but if she’s even the slightest bit unsure Dr. Martén will ask to meet them.

“I was always taught in residency, if you have a doubt see the patient,” states Dr. Martén reflecting on her Tulane education, the alma mater of both her dad and brother as well.

Though technology, medicine and surgery have seen advancements, Dr. Martén feels that the biggest area where ophthalmology could advance is in awareness and prevention. By establishing a relationship with patients and expressing concern over health risks, Dr. Martén believes that many lifestyle-induced ailments could be thwarted early on. 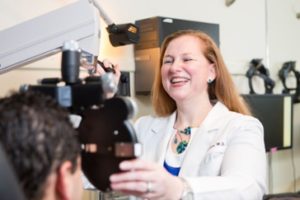 An example is the ever-present specter of diabetic retinopathy, or blindness by diabetes, in South Texas. The problematic diabetes rate among South Texas residents is no secret, and by earnestly discussing and addressing the risks associated with it, a host of medical complications, eye related and not, could be avoided.

Recently celebrating their seventh anniversary under Dr. Martén’s guide, the South Texas Eye Institute is geared for a future filled with success. Given the staff and Dr. Martén’s dedication to furthering themselves and offering only the best, it is no wonder that the San Antonio Rampage have consistently over the last seven years lauded the South Texas Eye Institute as their official eye care provider.

Though the question is, what more can this successful, happily married, mother of two seek to do?

And Dr. Marten’s answer is simple. “I just hope to continue to provide the best care to patients and eventually be able to offer more types of surgeries and specialties,” beams Dr. Martén.

With the support of the staff, her loving husband, Jorge, and sons, Alejandro and Andres, Dr. Martén’s future is as clear as 20/20 vision. The South Texas Eye Institute will undoubtedly continue their near-three decades of success and satisfaction, and with Dr. Martén at the helm, the future of eye care in San Antonio will be propelled by equal parts technology, compassion and earnest dedication to patient health.