It was more than six years ago when Laura Trammell took the day off from work in the Human Resources Department at Corpus Christi City Hall for her son’s birthday. It was a day that changed her life.

After returning home from delivering cupcakes to her son’s school, she had an event that left her unable to speak or walk. Trammell suffered a brain aneurysm and a stroke.

“To say I was surprised about having a stroke is an understatement,” Trammell says. “I always thought a man would be more likely to have stroke than me. I found out the hard way that it’s not true.”

This gender misconception about strokes is common, according to Dr. Michael Fuentes, Medical Director of Corpus Christi Rehabilitation Hospital. “Most people don’t realize that women suffer strokes more frequently than men,” he says. “If you’re a woman, you share a lot of the same risk factors for strokes as a man, but a woman’s risk is also influenced by hormones, reproductive health, pregnancy, childbirth and other gender-related factors.”

For example, birth control pills may double the risk of stroke, especially in women with high blood pressure or those that smoke. And, according to the American Heart Association, hormone replacement therapy – once thought to reduce stroke risk – in fact, actually increases it.

A recent study shared through the National Stroke Association listed these factors that have been found to increase stroke risk in women:

The study also showed a history of pregnancy complications can also indicate higher stroke risk. These problems include gestational diabetes and high blood pressure during or immediately after pregnancy.

“Add this to other general risk factors for stroke like family history, high blood pressure, diabetes, high cholesterol, smoking, lack of exercise, and being overweight and it becomes clearer as to why women can be more at risk for stroke than men,” Fuentes says.

Trammell was treated at a local hospital for initial care before being transferred to Corpus Christi Rehabilitation Hospital. She spent more than two months receiving rehabilitation to help her recover, which included daily physical, occupational, and speech therapy.

“Everyone there was just so wonderful,” she says. “I went into the rehabilitation hospital not able to talk or walk, and I’m able to do those things now. My words are hard to come by, but I can speak clearly. My hand and foot on the right side of my body don’t work well, but my arms and legs move. I’m so grateful that I’ve recovered this far.”

“Whatever stage of life a woman is in, it’s important that she be aware of all the risk factors of stroke,” Fuentes says. “As it’s often said, ‘knowledge is power.’ And in this case, the more knowledgeable a woman is about her stroke risk factors, the more she’ll be able to understand how she can be affected and work with her physician or healthcare provider as appropriate to reduce them.”

Corpus Christi Rehabilitation Hospital provides specialized physical rehabilitation services to patients recovering from or living with disabilities caused by injuries, illnesses, or chronic medical conditions. The hospital is ranked among the Top 10% in the nation, and its Stroke Rehabilitation program has been certified by The Joint Commission. 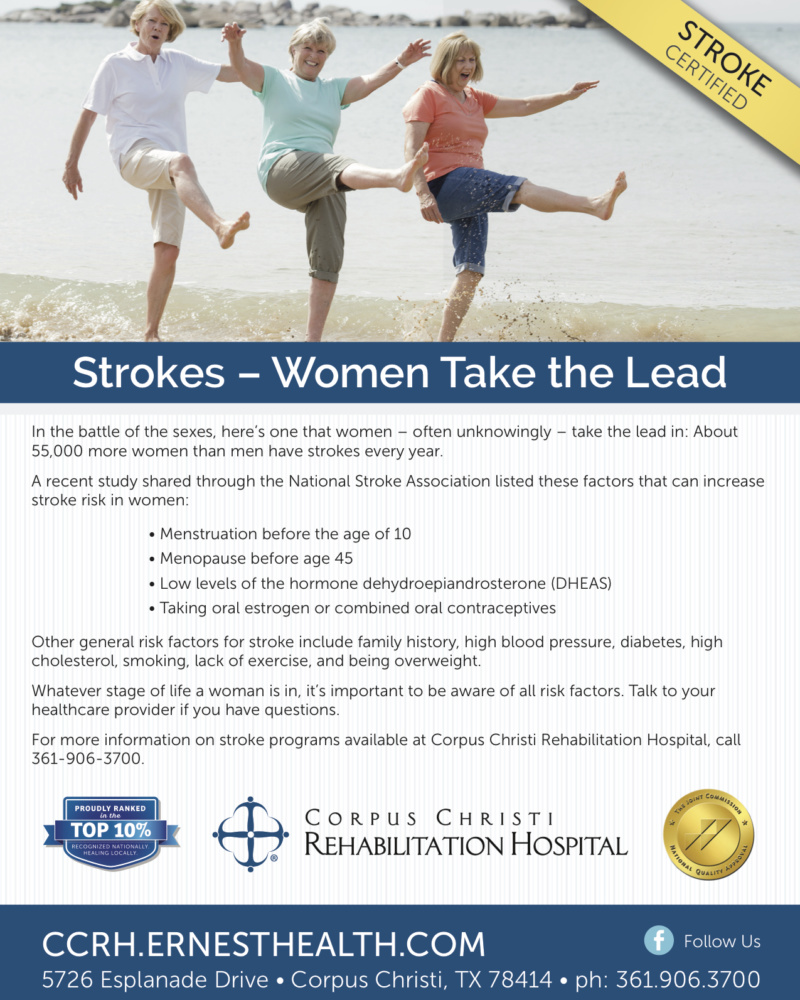