I saw Lee Majors at the WorldFest Film Festival last year sitting near me and handing out Remi Film Awards. My memory turned back to the 1974 famous television series on ABC network about a former astronaut with a bionic implant, “The Six Million Dollar Man.” I was just a child at that age with the concept of a bionic man and woman as no more than a fantasy. As I grew older and went through my journey of medical education, I soon realized that this fantasy can one day become reality and can serve as a second life to several folks. Whether they lost their limbs or organs as part of accidents, vascular diseases, strokes, tragic wars or explosions, they can be given another opportunity.

In the United States, approximately 2 million people are living their lives without a limb, 54 percent of those people are without a limb due to diabetes and another 45 percent of limb loss is due to trauma. Approximately 185,000 amputations occur in the United States every year, with South Texas being named as the amputation capital of the world due to the high prevalence of diabetes.

Imagine a child born with congenital limb malformation, a teenager suffering injuries due to trauma, or an adult not able to eat or drink from his own hand. Prosthesis was created to help people with amputations. Ask the kid who cannot type or the adult who cannot give a warm handshake. Scientists have been working diligently, and successfully, to make the fantasy of “The Six Million Dollar Man” and “Robocop” a reality. 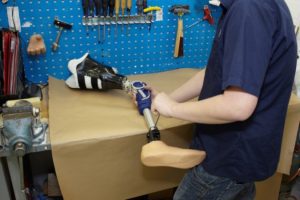 In the past five years, we have seen an emergence of bionic technology with devices designed to carry out several fine tasks, including lifting objects, picking up soda cans and drinking beer. This has all been achieved by computerized chips which communicate with the remaining sensory nerves, remnants of the injured limb, or via mobile phone. If we look at those devices, beneath those rubbery fingers are the micro-wires and computer chips which help in performing numerous finer tasks to resemble the human hand and limb. Ekso Bionics has built the Ekso skeleton suits. Touch Bionics, who are the makers of i-limb, have also started making organs using 3-D printing. Their i-limb has been hailed as the world’s most advanced prosthetic hand. Indeed, they have built more than 50 percent of the human body in different stages of functionality.

ReWalk Robotics from Maryland has already designed their sixth generation ReWalk Personal System, which is a wearable robotic exoskeleton that can be beneficial to people with spinal cord injury and paraplegia. These bionic devices are costly, but with 3-D printing, these devices can be made within minutes to an hour and can bring down the cost significantly. The concept of bionics is now being applied in the defense field.

Exoskeleton suits are being built to help soldiers carry heavier weight and improve mobility in difficult terrains in battlefields. John Hopkins has developed a device which uses the concept of targeted re-innervation that allows the brain to recognize and propagate signals by picking up the shoulder muscle where the remnant nerves are. An MIT professor, who himself is a double amputee, stated that, “About half of the world’s population has some unusual body or brain.” He mentioned that these technologies cannot only help in eliminating disabilities, but they can also help make them better than normal. 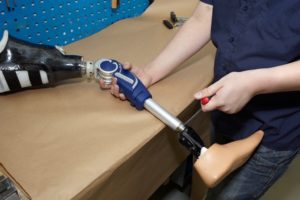 Currently, more than 125,000 patients are awaiting life-saving organ transplants. Every 10 minutes a person is added in the U.S. to the transplant list. Many of these people die while waiting for the transplant organs.

3-D printing is a technological advancement which has helped make several toys, industrial grade materials, and even artificial limbs with high accuracy. 3-D printing is like making any thing you want. The same technology has been used to create different organs like hearts, kidneys and lungs. This technological advancement is progressing at a very rapid pace. This advancement has generated a tremendous interest among scientists who have been working with human cells as 3-D printing ink. They aim to create the human organ in the exact same form with the help of computer technology. Scientists have so far printed a prototype outer ear with the help of 3-D printing technology. They have also designed several bony elements with high accuracy, as bone and cartilage need very limited nutrient. The University of Michigan has made an airway splint to repair a damaged trachea by using 3-D printing technology from reabsorbable material, which was fitted to infant damaged airways.

“Every 10 minutes a person is added in the U.S. to the transplant list.”

Currently, only the human body can grow human organs. So if an organ becomes non-functional then a person has to depend on an organ from a living donor, like a kidney, or from the donor who has been pronounced brain dead. The solid organs are not only very complex 3-D architectures, but they are also made of several cell lines which are placed on top of each other or are integrated with each other in a very complex form. Just like in transplants, the donor has to be kept alive on artificial machines until the organs are harvested. After harvesting, the organ has to be transplanted very quickly to the recipient’s body to restore the blood supply and nutrient supply. The same issue has become an area of challenge for 3-D printing. Not only do they have to create an organ with identically placed multiple cell lines with exact sequencing, but they must also ensure that the organs are printed rapidly with some nutrients to keep the cell lines alive and channels for future formation of the blood vessel.

The 3-D printing of organs will serve as a challenging and daunting task since it will be a necessity to address the nutrient and blood supplies. This will also create a major ethical dilemma; indeed, we are trying to pirate the engineering design of Mother Nature.