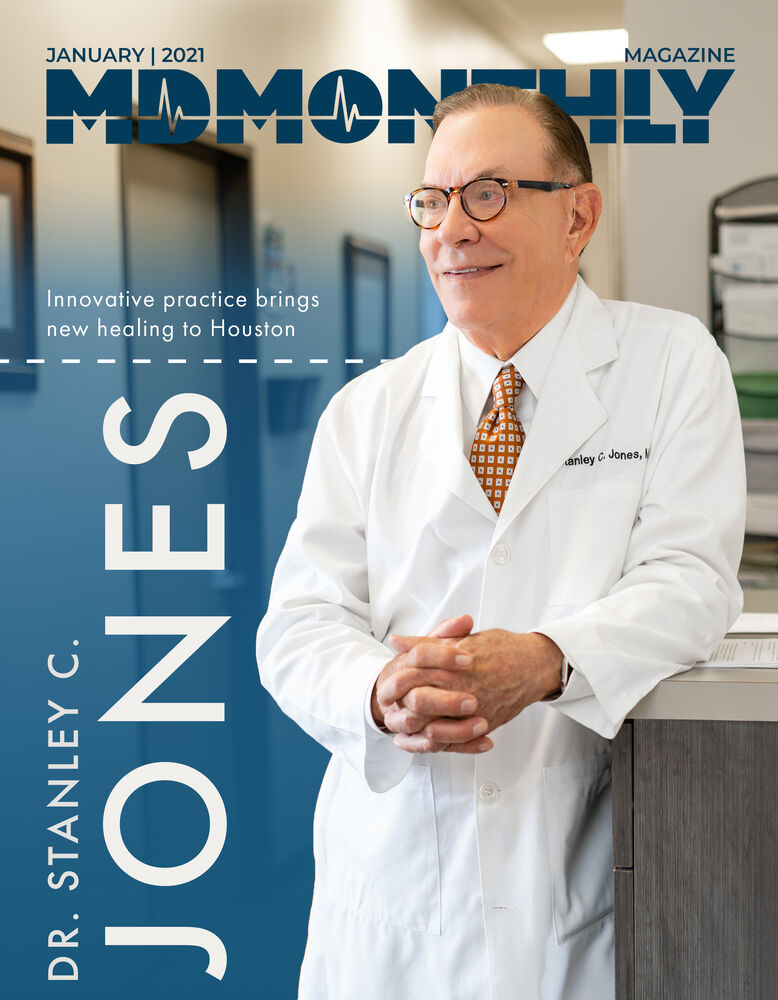 Decades of practicing medicine under his belt, Dr. Jones thought he had seen it all, but the last thing he saw coming would change his life and his practice for the better.

Dr. Jones, an accomplished spine surgeon, had been practicing medicine for nearly 30 years when in 2009, he found himself suddenly afflicted with acute Rheumatoid/Psoriatic arthritis. Everything hurt. His knee had swollen to four times its normal size. The pain was so excruciating that he soon found himself bound to a wheelchair. For a man dedicated to enabling people to live pain-free, this was an irony he did not expect.

Doctors were seen, fluid was drawn from the knee and tested, yet nobody could tell him what was wrong or what could be done to help alleviate his pain. Unbearable pain continued and the traditional, western medicine he had been taking to treat the pain, caused him to get so sick that he ended up with systemic candidiasis. For the majority of people, that would have been it. The end of the story. They would be destined to live in pain and misery for the rest of their lives. But for Dr. Jones, the outcome would be different. His inquisitive nature, always striving to know and learn more, the nature that led to him being one of the top spine surgeons in the country, catalyzed once again by these unfortunate circumstances, led him to hope. 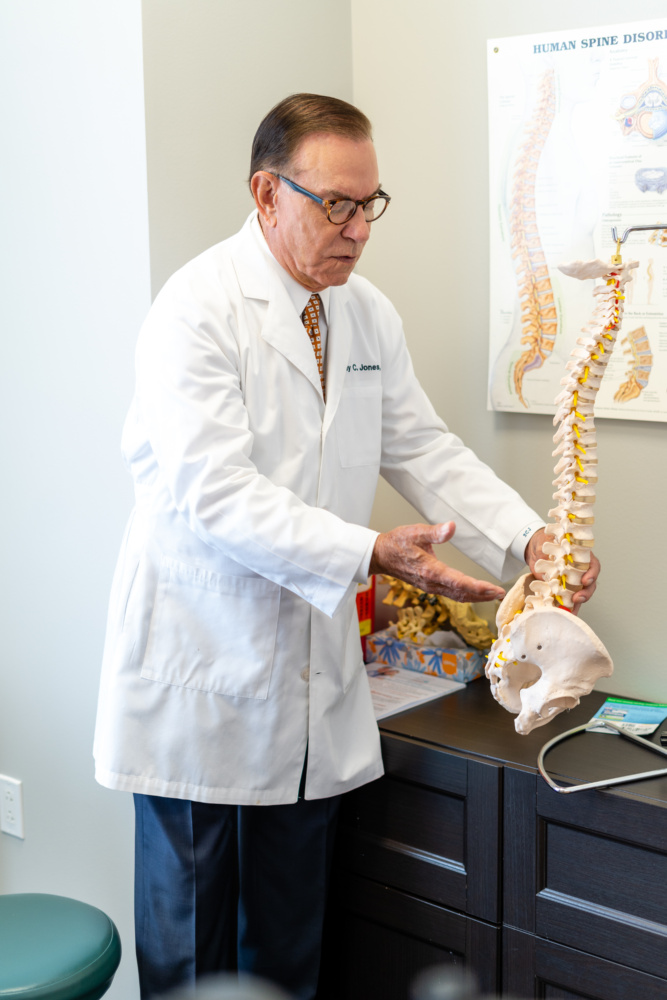 In his endearing and frank Texas accent, Dr. Jones stated “Instead of just crawling up in a corner and cryin’ the blues, I decided I’d check out whatever I could to get better.” This journey wouldn’t be for the faint of heart. It would take firm resolve and unshakable conviction.

Stem cells. There was little research on the methodology of utilizing stem cells, but it was a glimmer of hope. It was the seed. All Dr. Jones needed was that seed. He set his sights on stem cell therapy and never looked back.

After consulting with numerous doctors in and around Houston, Dr. Jones was told stem cell therapies were snake oil, they weren’t really useful. Stem cells in the opinion of many area doctors were absolutely useless. What little hope there was began dwindling. It only fueled the inquisitive fire. Surely, stem cells were good for something, right? Dr. Jones began researching outside of the United States, looking for places where there was data-driven stem cell treatments. His search landed him in Korea first, where there were studies done on patients with spinal cord injuries. Some of the most difficult injuries to heal and yet stem cells harvested from adult fat cells were having incredible results.

Eventually, Dr. Jones landed in Japan where he received stem cell therapy. This is where his life was given back to him. Where the journey of giving others their life back began. Healed, empowered, and armed with the scientific data, Dr. Jones set his sights back to Texas, and Houston, where he intended to change the way he and many others practiced medicine.

It was not without struggle. Many Houston doctors attempted to warn him off stem cell therapy, thinking he’d lose his medical license, be run out of business, or worse, go to jail for performing procedures/therapy’s not cleared by the FDA. Undeterred, unfettered, unconvinced of their claims Dr. Jones persevered.

Despite working with the Texas legislature and at the time Governor Perry, to get stem cell treatments approved, the Food and Drug Administration (FDA) came in after a year and a half and shut the therapy down. Their reasoning was simple, the stem cell treatment in their eyes, was a new drug and was thus required to undergo the processes by which the FDA approved drugs.

To every right, there is a wrong. To every obstacle, there is a way to overcome. Dr. Jones began taking his patients to Mexico and continued to change lives there. Currently, Dr. Jones is working with the FDA and can treat some specific cases at their Houston, Texas location. 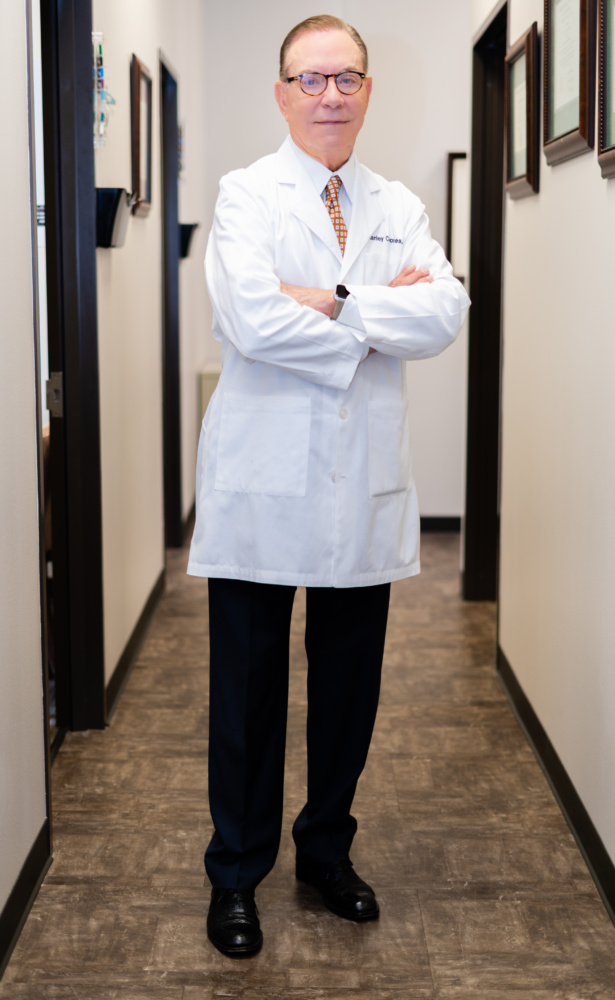 All this work with stem cells and regenerative health opened a new door for Dr. Jones. With minimally invasive procedures, similar to what he underwent, he could help people get back to the part of life that is most important…LIVING.

He began looking into new ways for people to have better patient outcomes and found two answers. Hormone balance and gut health. These two areas, often neglected, influence the homeostatic environment in our bodies.

What is homeostasis or a homeostatic environment? It’s the condition in which all bodily functions and processes are performing at the optimal level. When the body isn’t in homeostasis, things start to go wrong. Our joints become inflamed, our sex drive decreases, our moods suffer, our thinking suffers. Not being in homeostasis means everything on a physiological level is starting to fail.

Normal blood work does not reflect all that can be going on inside of a patient’s body. In fact, normal blood work is barely scraping the surface of the internal environment. Dr. Jones checks a variety of different hormones and other factors to get a clear picture of what is happening inside your body. Knowledge is power and the more that Dr. Jones knows, the more powerful his recommendations can be.

That place, where knowledge meets action is the place where your quality of life begins to improve. That place is ground zero for you fundamentally changing how you feel on a day to day basis. That place is the genesis of the life that has been given back to you.

But you’ll never know if it’s possible until you visit Dr. Jones yourself and find out you could be missing out on all life has to offer.