Can plunging one’s entire body into a freezing chamber reduce muscle pain? For the professional athletes and celebrities who have made cryotherapy so popular, the answer is yes. If the media coverage is any indication, extreme cold is very hot.

Many athletes, movie stars, and other opinion leaders have publicly extolled the benefits of Whole Body Cryotherapy (WBC) for losing weight, reducing pain, improving athletic performance, slowing aging and improving sleep. However, this relatively new treatment has not been vetted by any reputable medical organization and has had some tragic consequences for at least one young lady.

According to an article in Forbes, “the recent death of 24-year-old Chelsea Patricia Ake-Salvacion during a cryotherapy treatment has brought some increased scrutiny on a practice that has been growing in use worldwide.”

As they say, there’s nothing new under the sun. The Forbes article notes: “The most long-standing and common form of ‘cryotherapy’ is the application of ice or cold packs to injuries to cause blood vessels to constrict, which reduces blood flow and alleviates pain, swelling and inflammation. While there is still some debate over the longer-term effects on healing, such localized (i.e., applied to specific part of the body) ‘cryotherapy’ certainly seems to have clear short-term benefits and has long been standard practice among health professionals.”

The article points to another type of localized cryotherapy that is often called “cryosurgery.” This is the use of very cold substances, such as liquid nitrogen, to freeze and remove lesions such as skin tags, moles and prostate cancer.

The new twist to this old idea involves the “whole body cryotherapy (WBC).” This involves the exposure of the entire body to subzero temperatures, below 200 degrees Fahrenheit, for about three minutes. The participant stands in a form of closet, wearing minimal clothing while being bathed in liquid nitrogen or refrigerated air.

“When I instruct my patients, who are using traditional ice therapy, I tell them to limit the exposure to no more than 20 minutes”

The WBC began in Japan in the latter half of the 1970s, and Japanese rheumatologist Toshima Yamaguchi is given credit for developing the process. From its start in Japan WBC has spread worldwide and is one of the fastest growing procedures in sports medicine.

My colleagues and I at Texas Back Institute treat hundreds of patients every week and many are suffering from back pain caused by either overuse or injury. Cold treatment can speed recovery. For example, ice can cause a restriction of blood flow to an injury that can prevent swelling and inflammation. It can also reduce pain by reducing nerve transmission at the injured area. However, there is a risk in this type of extreme cold therapy.

Just like when one is exposed to any cold temperature, you can develop freeze burns in the area of the skin exposed. This can lead to damage to the skin surface area. When I instruct my patients, who are using traditional ice therapy, I tell them to limit the exposure to no more than 20 minutes. Also, I ask that they do not repeat this treatment for at least two hours. Too much exposure to the cold can cause a“freeze burn” which is the result of the lack of blood flow to the area.

When we get an injury, whether it is a knee, ankle or back injury, the body sends more blood to that area. Unfortunately, that increased blood flow causes swelling, encouraging all of these inflammatory cells to come into that area. Over the long term, this swelling causes restrictions of the joints and muscles, keeping the patient from getting up and moving again. 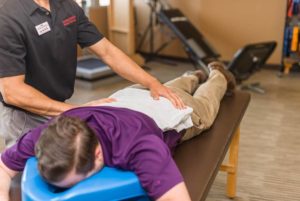 When someone has an injury, their physician will tell them to elevate it if it is a limb and you need to ice it so that the blood flow is somewhat restricted, reducing swelling.

What I recommend in the first 72-hours of an acute back strain is to use ice. Do not use heat. This is because heat increases blood flow and ice restricts it to reduce swelling. Eventually, the swelling comes down and the muscles get stiff. This is where you want to begin alternating heat and ice treatment over the next three to four days.

According to the research and media coverage, such as the Forbes article, there is little scientific evidence to support many of the claims made by the owners of cryotherapy chambers. For example, there is no credible research to support its value as a weight-loss procedure.

According to Forbes: “Health professionals have used WBC to relieve pain and inflammation conditions such as arthritis, fibromyalgia, ankylosing spondylitis and injuries.” However, a recently published systematic review of the literature did not find compelling scientific evidence that WBC is effective in preventing and treating muscle soreness after exercise in adults. Without nearly enough scientific evidence, the U.S. Food and Drug Administration (FDA) has not yet approved WBC as a medical treatment.

The bottom line is, it’s much easier for a patient to grab a bag of ice out of the freezer than to track down a cryotherapy chamber.

Whether you are a professional athlete or weekend warrior who took on a little too much exercise, back pain can be miserable. You don’t have to suffer this pain. Contact Dr. Nayan Patel or any other of the spine specialists at the Texas Back Institute in Plano, Texas by calling 800.247.2225.