Phones ring and pierce the steady chatter in the clinic. Laughter lets loose and smiles break across the faces of doctors, physicians’ assistants and nurse practitioners, amplifying an already jovial atmosphere. It’s amazing that in the bustle of a busy clinic, the constant motion of curing and caring is conducted with flawless professionalism and genuine joy.

Though after meeting Dr. Saleh Jaafar, the clinic and staff’s demeanor is no longer so peculiar. Both the clinic and staff are an accurate reflection of Dr. Jaafar, his mission, and overall outlook on the role of medical professionals and the ever-evolving doctor-patient relationship.

A child of Baalbeck, Lebanon, roughly 53 miles north of Beirut, Saleh Jaafar was born in 1965. And while it is typically difficult to recall early childhood memories, he still remembers his mother’s desire for him to enter the medical field. “My mom told me to be a doctor since I was 3-years-old,” says Jaafar with a smile, “And I honestly never thought about anything else.”

It was undoubtedly this encouragement from his mother, coupled with his life in Baalbeck, that molded Saleh into the Dr. Jaafar Texans know and love today. Rather than look toward metro areas, like Beirut or Houston, his professional fervor is rooted in practicing rural medicine, likely stemming from his formative years in Baalbeck. 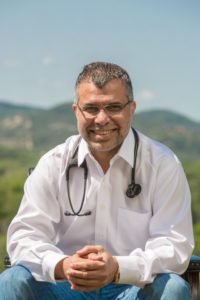 Dr. Jaafar’s devotion to rural medicine is founded in his extensive experience and studies across three continents in both rural and metropolitan areas. This expansive experience has shown and confirmed to Dr. Jaafar that the rural communities of Texas, and the world at large, are in need of steadfast physicians who can adapt and truly earn the trust of the communities they serve.

But this knowledge didn’t simply thrust itself upon the impassioned physician. It was the by-product of his schooling and residencies.

Growing up, Dr. Jaafar attended an international boarding school in Lebanon. Luckily, his attendance at the boarding school largely insulated him from the Lebanese Civil War that began in the mid-70s. In 1983, Jaafar decided to leave Lebanon and moved to France to attend the American University of Paris.

But after a few months, he was disenchanted with Paris and moved back to Lebanon to attend the American University of Beirut, where he would major in chemistry as a pre-med student.

After his graduation, Jaafar was faced with a few options — to study medicine at the American University in Beirut or to leave and attend another medical school. Ever the adventurer, Dr. Jaafar opted to leave and attended medical school in the British West Indies. He then spent a year training in Kingston-upon-Thames, outside of London, in the United Kingdom, and he finished his last year of schooling in the U.S. Dr. Jaafar did rotations at East Tennessee State, in Johnson City, USC in Los Angeles, an internship at Texas Tech in El Paso, and he did his residency in internal medicine at UTSA, ultimately finishing in 1996.

Following his schooling and travels, Dr. Jaafar took a position as the medical director of the emergency room in Hondo, Texas. “I gained a ton of experience in that ER,” recalls Jaafar warmly. And while the trials of the ER could prove overwhelming for some, Dr. Jaafar decided to open a satellite clinic in Castroville.

Just a few years later, he took over the clinic in Bandera too. Since then Jaafar and his associates have opened additional clinics in Boerne, Stone Oak, Utopia and by this summer they’ll have a new clinic in the Medical Center, for a grand total of six locations.

Though his success was not as simple as the humble doctor makes it sound.

“Whether they’re in the hospital, rehab, in hospice, we’re still involved with their health” – Dr. Saleh Jaafar

When Dr. Jaafar worked in the ER, he would frequently work for 72 hours “on” with only 24 hours off. “I still opened the clinic in those 24 hours,” beams Dr. Jaafar, adding, “That’s how I met everybody in Medina County.”

Although Dr. Jaafar graduated in the top of his class, he was still drawn to practice medicine in the rural areas. Medina County’s need for more physicians compelled him to help the people. Prior to arriving, the emergency room was typically manned by doctors who volunteered their free time. But when Dr. Jaafar took over, he brought two other graduates with him to work and service the residents of Medina County.

“We really brought a ton of character to that ER,” says Dr. Jaafar on he and his co-workers’ efforts in the mid-90s.

Indeed, in 1997 the San Antonio Medical Gazette wrote an article profiling Drs. Mercado and Jaafar and the “insane” schedule the two committed themselves to. “We got that ER up to a class that no one had seen before,” shares Dr. Jaafar proudly. As an internist, it gave Dr. Jaafar ample experience that he has since taken and employed in all other clinics he has worked in.

Because of this real-life education, Dr. Jaafar makes it a point to see anyone and everyone. “I’ll see adults, newborns, kids. I’ve done skin cancer surgeries that no internist will do just because of where I am,” explains Dr. Jaafar. This is because of the limited medical resources and access rural residents have. So while in Stone Oak, Dr. Jaafar may practice solely as an internist, but when in Bandera or another rural area, he must act as the jack-of-all-trades. “I’m the psychiatrist, a surgeon, a plastic surgeon, I mean everything,” jokes Dr. Jaafar.

The demand to be a multi-faceted physician has blessed Dr. Jaafar with a keen awareness and knowledge of a myriad of health issues that patients, both rural and urban, may face. Indeed, he recalls a patient named Juanita who had a persistent rash on her leg. She was referred to a dermatologist who conducted a biopsy and decided that it was nothing more than a minor rash.

“The youngest doctor in my group can come up with as many rules as I do”– Dr. Saleh Jaafar

Despite the diagnosis, Juanita continued to have problems with the persistent leg rash.

Juanita was referred to Dr. Jaafar who, employing his experience in rural health, took a look and told her that it was squamous cell carcinoma — a cancer caused by an uncontrolled growth of abnormal squamous cells. She explained to Dr. Jaafar how she had already had a biopsy and that the rash wasn’t cancerous.

Trusting his clinical suspicion, Dr. Jaafar implored Juanita to allow him to do a biopsy of his own. The initial test came back negative, and naturally, Juanita was ecstatic and shared with Dr. Jaafar. Though, ever-persistent, Dr. Jaafar asked once more to conduct his own biopsy and remove the cells. Despite three tests, two analysis by dermatologists and a biopsy of his own, Dr. Jaafar ultimately proved to be right in his inaugural diagnosis.

Employing rural know-how and his persistent spirit, Dr. Jaafar acted on his acquired knowledge and saved Juanita from suffering. “She’s now my patient for the rest of her life, because I refused to believe the dermatologists and biopsies, and I trusted my clinical suspicion,” shares Dr. Jaafar. 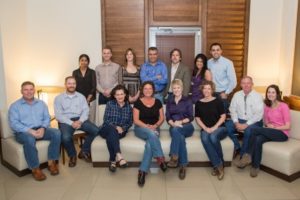 The foundation of trust and rapport Dr. Jaafar has with his patients extends into his practice and relationships with fellow partners. When he started his practice it was solely him, today he works alongside 23 healthcare professionals, all of whom have an equal voice in the policies of MedCare Associates.

Unlike other medical groups or monolithic medical systems, Dr. Jaafar encourages his group to function as a true democracy. All partners are encouraged to propose new rules and policies for the group that are then discussed and voted on, and, if supported by a majority, implemented. “The youngest doctor in my group can come up with as many rules as I do,” explains Dr. Jaafar on his group’s democratic decision-making.

This camaraderie amongst MedCare Associates exemplifies the beauty of successful synchronicity. Indeed, when interviewing potential new partners Dr. Jaafar is candid with them and explains that, “When you join our group, your patients will be your patients. You’re not just another resident who graduated, you’re a valued member of our team.”

Rather than get bogged down in the bureaucracy of contractual agreements and non-compete clauses, Dr. Jaafar still conducts business the old-fashion way — with a handshake and his word. It is undoubtedly this manner of business that has attracted skilled physicians to work with MedCare Associates.

“I’m able to help more people, they put their trust in me, and you cannot replace that trust ever” – Dr. Saleh Jaafar

For all of his success, Dr. Jaafar remains a humble, humorous and relaxing presence for all around him. Though he credits his success to hard work, he also acknowledges that the support of Laura, his wife of 25 years, and the joy of his three children, Jordan, Brandon and Sophie, are huge motivating factors in continuing his work. When he’s not caring for and curing the communities, Dr. Jaafar enjoys spending time with his loving family, and he is an avid outdoors man, with a passion for hunting, fishing and ranching.

It’s the necessity of varied skill sets that draws Dr. Jaafar to practicing rural health. “I’m able to help more people, they put their trust in me, and you cannot replace that trust ever,” explains Dr. Jaafar. In cities, there are more ample resources and specialists, but in rural areas like Bandera “you’re it, you’re the guy, you’re their doctor.”

It is this foundation of doctor-patient trust that has made Dr. Jaafar a household name in his rural clinics, and because of these relationships, his patients remain his patients for life. “Whether they’re in the hospital, rehab, in hospice, we’re still involved with their health,” shares Dr. Jaafar earnestly.

This sense of responsibility stems from the longevity of Dr. Jaafar’s relationships. He details that he feels obligated to remain involved because, “I’ve seen them for 20 years, and now they’re dying, so how could I tell them ‘Well Dr. Smith is going to take care of you.’”

And while they may not say it, Dr. Jaafar explains that that kills their spirit because the patients have connected and known their physician for so long that there is a level of trust and acknowledgment that he will do whatever it takes to keep his patients healthy.