A mammography is a method utilized to diagnose individuals with breast diseases. The procedure makes use of an x-ray machine in order to detect possible abnormalities, such as breast cancer, caused by diseases in the breast area.

The procedure allows patients to be diagnosed even before a cancerous tumor is felt. Also through the mammogram, the presence of cancer can be detected at an early stage. By searching for and finding lumps caused by cancer at an early stage, the spread of the disease can be avoided or at the very least minimized. This may also mean that breast cancer treatment can be initiated earlier, leaving patients with numerous treatment options and minimizing damage to the body. In recent studies, mammography screenings, among other breast cancer screening options, have been shown to help decrease breast cancer fatalities among women 40- to 74-years-old.

A screening mammography is usually used by women with no signs or symptoms of cancer. A diagnostic mammography is used to inspect the breast for tumors. This type of mammography may also be done after a mammogram tested positive during a screening exam. This measure further evaluates the area with abnormalities by magnifying it. After which, a clearer version of the picture will be submitted for closer examination. 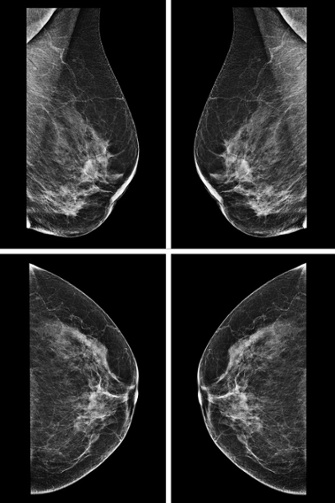 Breast tomosynthesis mammography, a relatively new type, produces a 3-D picture to allow an easier and more accurate examination of thebreast. Although this test may have an added risk as it uses more radiation to work efficiently, it is by far the most reliable instrument to find cancerous tumors in the breast.

While mammography has been proven to be one of the most effective breast cancer detection tools, it still has a number of limitations that interfere with its established integrity and produce abnormal mammograms.

False-positive results occur when the machine detects an abnormality in the breast area, but in reality, there is actually no cancer present. The test results may appear to be positive due to other mass formations unrelated to cancer. This confusion sometimes happens because the machine can merely detect abnormal lump formations, but it cannot identify the cause of the perceived abnormality.

False-negative results happen when the machine detects no abnormalities in the breast area even if during the process, a lump is actually present. This is because breast tissues, in some occasions, hide the lump from breast cancer. According to studies, mammograms still miss about 20 percent of breast cancers because lumps were simply not apparent during the mammography.

X-ray machines emit radiation throughout the procedure, but it is important to note that the machine only requires a minimal dose. Studies have shown that radiation exposure from mammograms has a very low risk of harm. Also, people should be comforted to know that most mammogram x-ray machines we use today expose the breast to much less radiation compared to machines in the past.

Another known limitation of mammography is that it does not have the capability to differentiate lumps, such as cancer cells, fatty cells and cysts. This is usually a problem for doctors as it is difficult to identify the lump with this tool alone. It is necessary for patients who appear to have abnormalities in the breast area undergo further tests. In order to confirm whether the lump is caused by cancer, many patients will usually undergo a biopsy.