Previously, many Rio Grande Valley residents in need of an organ transplant, or those in need of pre- or post-operative transplant care, had to travel to San Antonio or elsewhere outside of deep South Texas for their medical care.

The Renaissance Transplant Institute is currently the sole facility in the Rio Grande Valley that offers kidney transplant services, including comprehensive pre- and post-operative care. Now, patients no longer have to leave the RGV, but instead, they get all of their assessments and follow-up care done close to home.

In prior years, physicians from the University of Texas Health Science Center in San Antonio (UTHSCSA) agreed to work with DHR to develop clinical services in the Valley for transplant and cancer patients. But the patients still had to go elsewhere for surgery, often being away from family for days or weeks at a time.

“I’m very loyal to my patients. I think of them as family members” -Dr. Mourad Alsabbagh, transplant medical director at Renaissance Transplant Institute

Leaders from Doctors Hospital at Renaissance have said that facilities for liver and even heart transplants will be eyed for development locally, but kidney care is the focus for the time being.

“I’m the only fellowship-trained liver and pancreas surgeon for the Rio Grande Valley, and we have a population of approximately 1.4 million people,” Dr. Almeda says. “To compare, there are five surgeons in the San Antonio who do the same surgery.” San Antonio’s population is estimated at 1.4 million in the most recent census data available.

The Renaissance Transplant Institute is expected to be fully certified by the United Network for Organ Sharing and Centers for Medicare and Medicaid Services later this summer to begin on-site procedures. 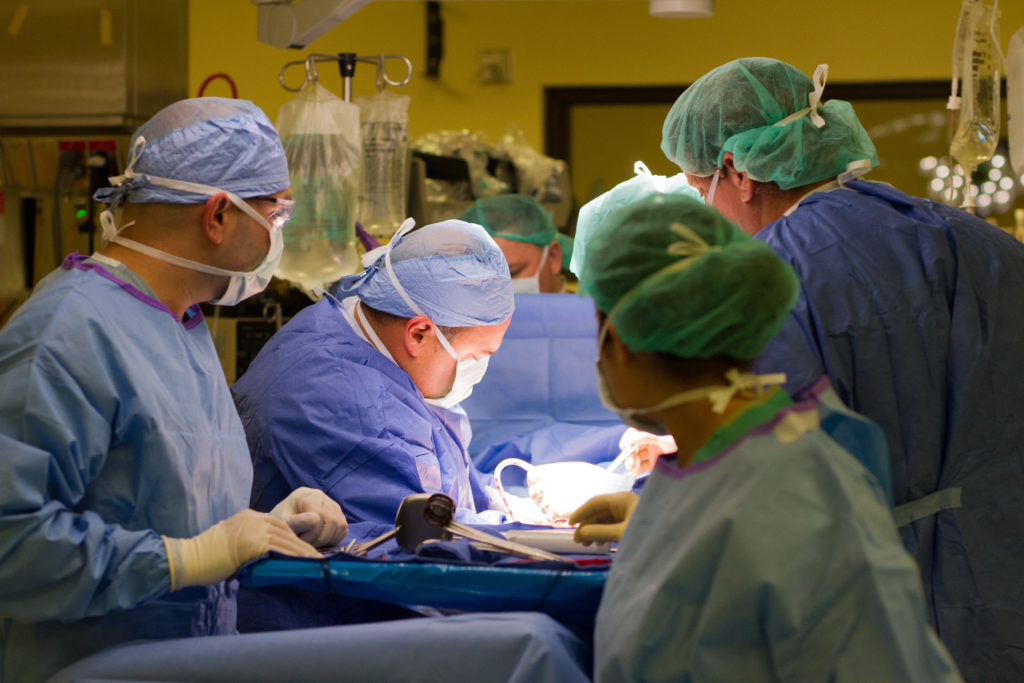 “Any liver cancer or pancreas issue that requires surgery, Dr. Almeda does them here at DHR,” Disque shares proudly. She adds it will likely take two to three years to establish a solid kidney transplant program in Edinburg.

The opening of the Transplant Institute comes at a vital time. The number of organ transplants in the United States reached an all-time high in 2015, with more than 30,000 procedures performed. However, there’s still a need for more organ donors.

According to statistics from the Texas Organ Sharing Alliance, more than 120,000 people in the United States are on the organ transplant waiting list. More than 8,000 people die each year, awaiting the reception of one or more life-saving organs. One registered organ donor could save as many as eight people. In April, Doctors Hospital at Renaissance held a ceremony hailing the opening of the RTI to mark National Donate Life Month.

The opening of the Renaissance Transplant Institute is a milestone for the Rio Grande Valley because of the high rate of incidents of kidney and liver diseases, diabetes and related ailments in the region. Specifically, nearly 76,000 people in the Valley have diabetes. There are more than 4,000 people on dialysis in the Valley.

Minorities, such as Hispanics, Native Americans, African-Americans and Pacific Islanders, are all at a greater risk for developing chronic conditions that affect the liver, heart and kidneys. Additionally, there is a greater diversity of blood types within these communities, which makes the need for organ donation even more vital.

“I’m the only liver and pancreas surgeon the Rio Grande Valley, and we have a population of 1.4 million people” -Dr. Jose Almeda, transplant director at DHR’s Liver and Pancreas Surgery Center

A Del Rio native, Dr. Almeda completed medical school and his general surgery residency training at UTHSCSA. He completed two fellowships in liver and kidney transplantation, and liver and pancreas cancer surgery at the University of Southern California.

Back in Texas, Dr. Almeda would spend three weeks working in San Antonio, then one week performing surgeries and doing consultations in the Rio Grande Valley. Doctors Hospital at Renaissance eventually asked him to stay on with their system and practice full-time in the Valley.

But it was from the same program that DHR recruited Dr. Alsabbagh, a transplant nephrologist, to join its mission. The Syrian native trained in Florida where he was first exposed to kidney transplantation. He moved to the Rio Grande Valley in 2012.

“I’m very loyal to my patients. I think of them as family members,” Dr. Alsabbagh shares with a smile.

Dr. Alsabbagh explains that dialysis is just a short-term bridge and fix of sorts, but it remains inconvenient to patients because it takes so much time and effort, and because it causes the patient to be sick afterward.

Using statistical data, Dr. Alsabbagh explained that kidney transplants will improve the patients’ survival significantly—having a transplant decreases the mortality rate from about 14 percent for dialysis patients to only 4 percent post kidney transplant.

“It is very well known and studied in medical literature that dialysis is often not the best treatment management for kidney disease. It’s really up to having a transplant. Then, you get rid of the disease with a new kidney,” Dr. Alsabbagh says.

According to the Organ Procurement and Transplantation Network, 98 percent of people who receive a living-donor kidney transplant live on at least one year after their surgery. About 90 percent of the same people live at least five years.

“A transplant will not only help you live longer, but you will live better,” Dr. Alsabbagh says. “As long as you take your [post-surgery] medication as directed and live healthy, you’ll be fine.”

Dr. Alsabbagh emphasizes the need for a robust kidney transplant center in the RGV, like RTI, and he is very proud of their professional and well-educated team. Dr. Alsabbagh states that the patient care team at RTI provides the best quality service for their kidney patients, including the thorough pre-transplant evaluation, perioperative patient care and, most importantly, the lifelong post-kidney transplant care.

That’s why, in addition to offering transplant and all the accompanying care, the new transplant institute is working with DHR to find ways to educate residents about reducing the risks of kidney disease, diabetes, high blood pressure and other high-risk ailments in the Rio Grande Valley. 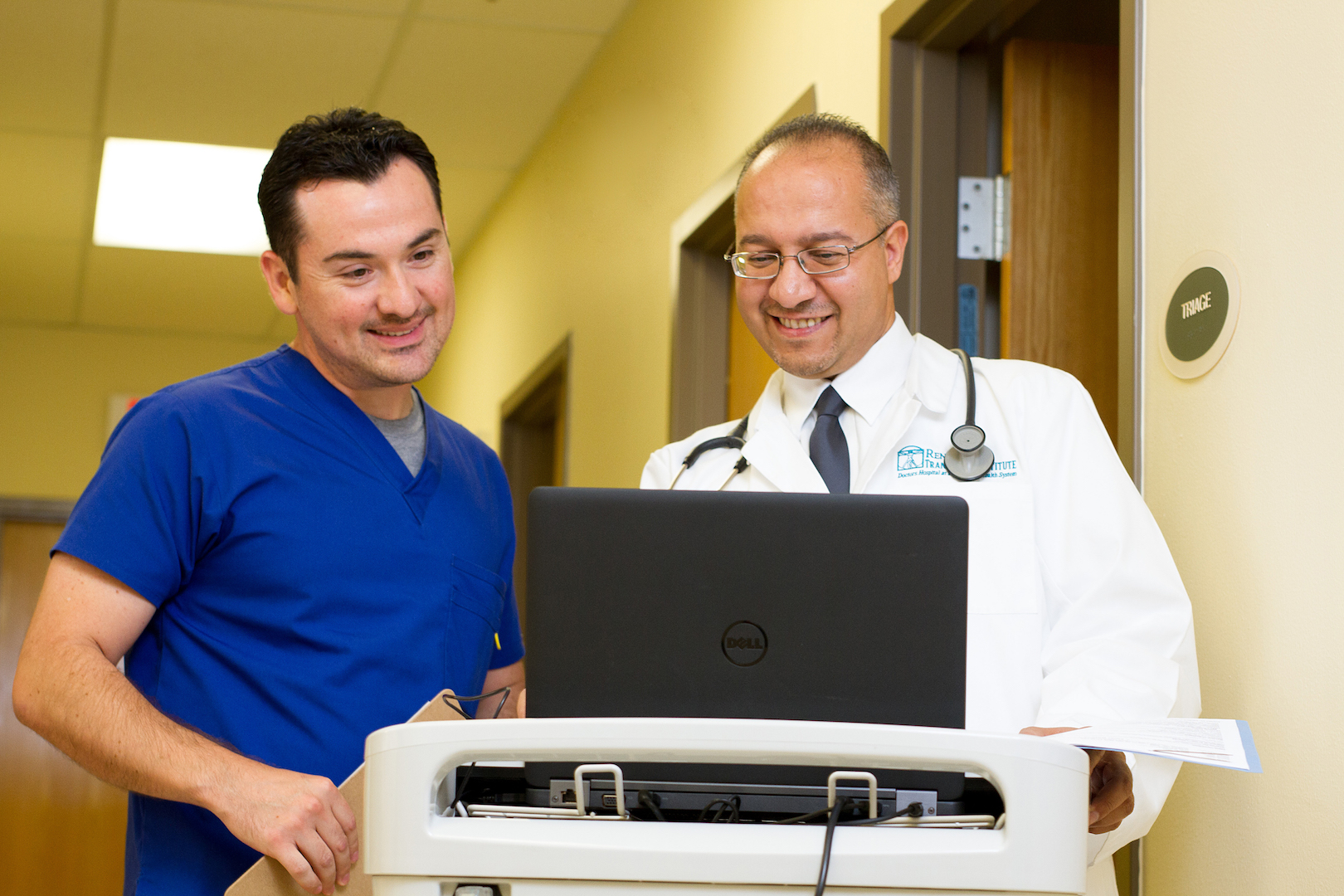 “We are here to help the community. This area really needs someone to put in the time and effort,” Dr. Alsabbagh says. He adds that lower socioeconomic levels put the predominantly Hispanic population at greater risk for certain diseases and chronic conditions like chronic kidney disease. It’s why public health education, from an early age, is so important and essential, he says.

“Eat less and better, and move around more,” Dr. Almeda adds in summing up the easiest things a person can do to reduce certain health risks. “We can do health fairs, community screenings, but it’s really the physician’s responsibility to educate the patient.”

Dr. Almeda says he is confident the new Renaissance Transplant Institute will be successful in not only treating regional patients, but also in garnering solid support from the participating physicians. 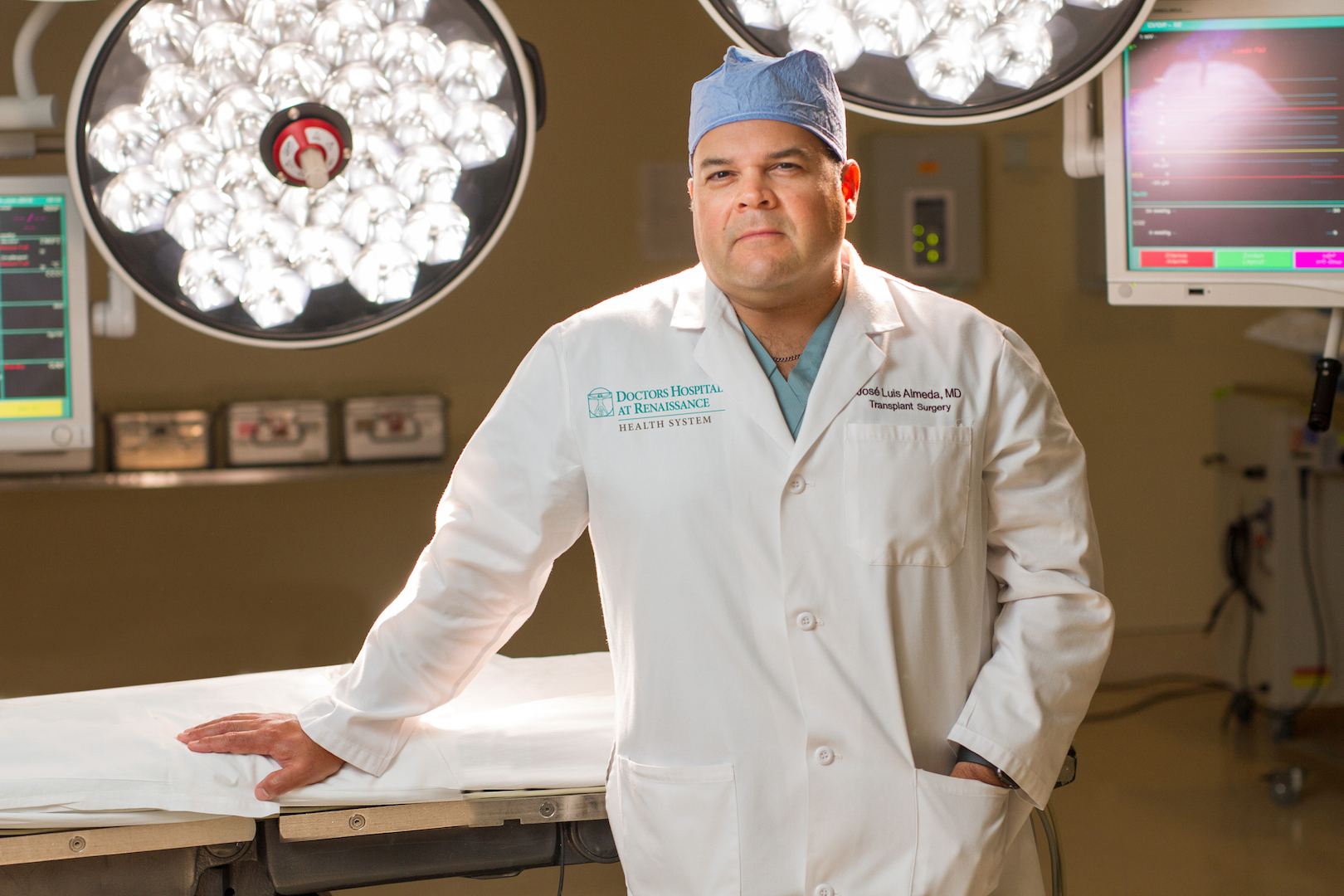 Doctors Hospital at Renaissance is one of the largest physician-owned facilities in the nation. Having opened as an ambulatory surgical center in 1997, DHR has been ranked among the country’s 100 Top Hospitals by Thomson Reuters, and as one of the 100 Top Hospitals for Cardiovascular Care.

Doctors Hospital at Renaissance has also been ranked first in Hidalgo County and No. 17 in the state by U.S. News and World Report for quality medical care.

“You have to have a buy-in,” Dr. Almeda says about the physician partners being invested in the performance and outcome of the programs at DHR. The new institute operates for now in a 5,000-square- foot clinical space behind DHR’s emergency room. But the Transplant Institute, Liver Institute, and the LPSC all will eventually move into a new, state-of- the-art, 22,000-square- foot transplant facility. 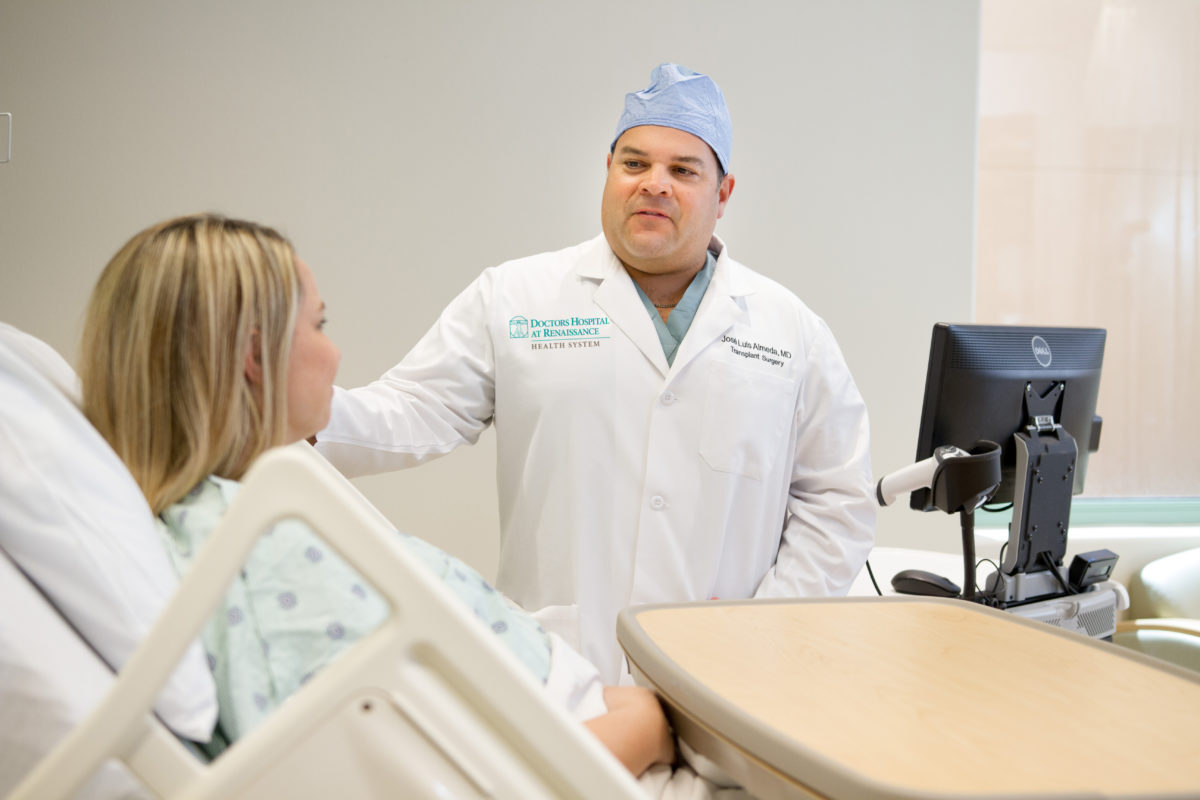 While it’s separate from the opening of the transplant institute, The Liver Institute is furthering research into the causes of liver disease, including cancer. Dr. Almeda is leading a study, funded by the National Institutes of Health, to determine a person’s risk of liver disease.

Specifically, the study will involve a fibrosis scan of a person’s liver, run an analysis, and compare the findings with those from a family member’s liver. The study then would follow the patient for the rest of their life. The idea is to find out the reasons why a Valley resident would be at risk for a particular ailment.

Because the liver performs several critical tasks that affect the entire body, such as helping to remove toxins and medications from the bloodstream and helping with digestion of food, a person cannot live without that organ functioning properly.

“Maybe we could answer the question, why are so many Hispanics getting liver cancer? Is it the diet? Is there something in the water? Genomics?” Dr. Almeda explains. “Maybe one day we can identify something in the patient with a blood test and start care early.”

With initiatives such as this long-term research and the opening of the Renaissance Transplant Institute, it’s evident that Doctors Hospital at Renaissance Health System is bringing new life to the Rio Grande Valley by providing specialized healthcare where it is needed most.

For more information about the Renaissance Transplant Institute and its services, call 956.362.5433.