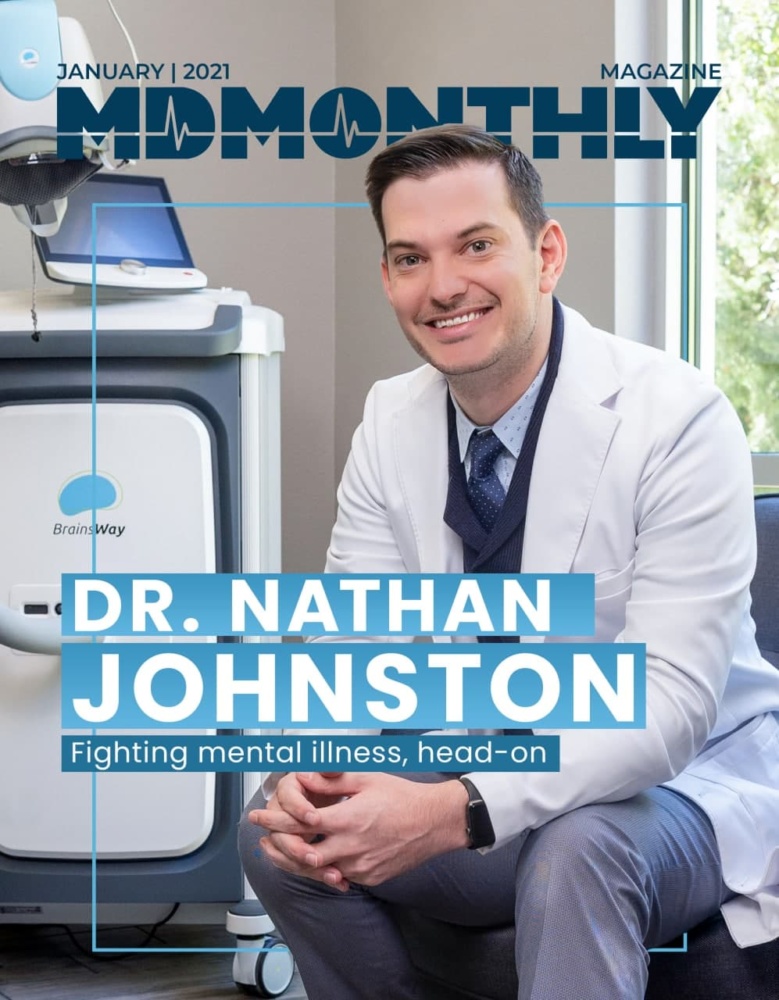 Sometimes, it’s hard not to take things personally. As someone who struggled with anxiety, Dr. Johnston knows firsthand the difficulties many patients deal with. The issue of mental health is a very personal and private battle. The notion that our brain is “broken” throws so much into question. Nervously asking ourselves in our most quiet and private place;

Follow that whole ordeal up with psychiatry practice that has earned a reputation for shoveling medications at patients without listening to them and you’ve got one of the larger contributing factors to the sad state of mental health in this country.

A firsthand witness and party to the above circumstances, Dr. Johnston, who battles General Anxiety Disorder and is a practicing psychiatrist, felt called to be the difference. Just as he encourages his patients to take after the Phoenix, to be reborn in fiery glory, so too is Dr. Johnston responsible for the rebirth of psychiatric practice.

When you first meet Dr. Johnston, you’re automatically put at ease. Armed with a boyish smile, he has a mind tempered with knowledge and wisdom he earned through years of work at the VA hospital where he helped the men and women of our armed forces cope with the horrors of war. It’s difficult to not immediately trust the man, despite his imposing height and stature. While some might deem it paradoxical, a tall, athletic, and powerfully built young man whose voice is soothing and calm rather than intimidating and booming, Dr. Johnston guides patients towards hope. Hope that the predicament they are in will not last forever.

At Phoenix Mental Health, Dr. Johnston and his staff provide a multitude of services, including medication management for those who are just beginning their journey with mental health treatment or those who are already experiencing a positive outcome with their medications. 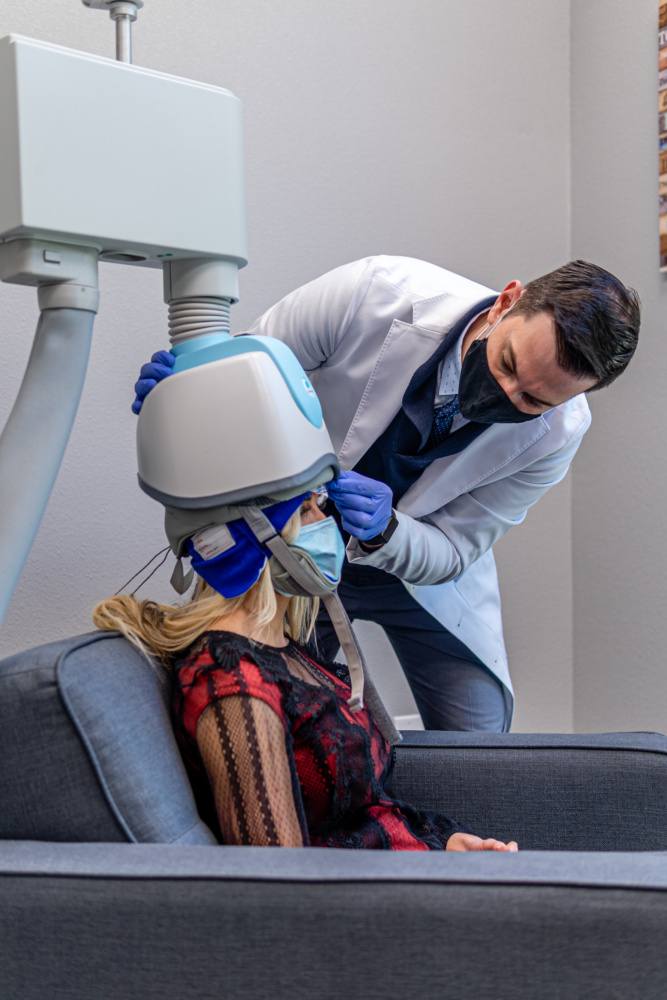 Dr. Johnston sets up the Deep TMS headset on a patient undergoing a Deep TMS treatment.

Sadly, a substantial percentage of patients see no improvement on traditional anti-depressant or anti-anxiety medications. It can be a harrowing experience to take drug after drug, starting and stopping, experience the wide-ranging side effects of many different medications, just to be right back at square one or even worse, back a few steps due to the failure of the medication and the hopelessness that accompanies that failure.

This is where the revolutionary treatments that Dr. Johnston offers at Phoenix Mental Health make their spectacular entrance onto the stage. In addition to traditional medication approaches, these new treatments offer another set of tools in the proverbial toolbox for Dr. Johnston to reinvigorate the spirit of hope in his patients.

Transcranial Magnetic Stimulation (TMS) has been around for several years as an alternative to many treatments, however, the Deep TMS treatment is relatively new and Dr. Johnston is the only psychiatrist in San Antonio to offer the Deep TMS treatments. Utilizing a much larger magnet, this safe and evidence-based therapeutic modality allows Dr. Johnston to target regions in the brain much deeper than a normal TMS machine and thus provide better and longer-lasting patient outcomes.

Utilizing chemicals (neurotransmitters) and electrical stimuli, the brain is the most complex and fascinating organ in our body. Together, the neurotransmitters and the electrical stimuli allow us to perform everything from deep critical thinking, to our heart beating, to perceiving and interacting with the world around us. However, from time to time, due to the extremely complex nature of our world, the neurotransmitters and accompanying electrical impulses become disrupted and fail to function properly. It takes one or both to help our brains get back on track. Utilizing magnetic impulses, Deep TMS treatments pinpoint the exact area in our brains where major depressive disorder, obsessive-compulsive disorder, and addictions reside. The machine then stimulates those areas with the proper electrical stimuli. This stimulation allows the brain to, in essence, reset itself and get back to working properly.

Sounds simple, right? Well, yes and no. As the brain is an extremely complex structure with billions of neural pathways, getting the proper amount of stimulation to those areas can be difficult. With a larger magnet, the Deep TMS machine by BrainsWay reaches deeper into the brain, allowing the doctor to treat the patient more completely. We’re not scraping the surface anymore. We’re digging deep where the treasure of hope lies. A place where you no longer have to suffer the debilitating effects of depression or obsessive-compulsive disorder or unwanted side effects from medication you may hate being on. That is where Phoenix Mental Health and Doctor Johnston are going.

While impressive and effective, TMS and Deep TMS are not a cure-all. Dr. Johnston also performs ketamine therapy for patients that do not fit the protocol for Deep TMS. Despite the fact that ketamine has been around for quite some time, the use of ketamine in treating mental health disorders is relatively new. The main reason that ketamine has been effective is due to its interaction with glutamate which acts as a regulator of three key neurotransmitters; dopamine, serotonin, and norepinephrine. These four neurotransmitters are essential to stabilizing your mood and ensuring homeostatic stability. 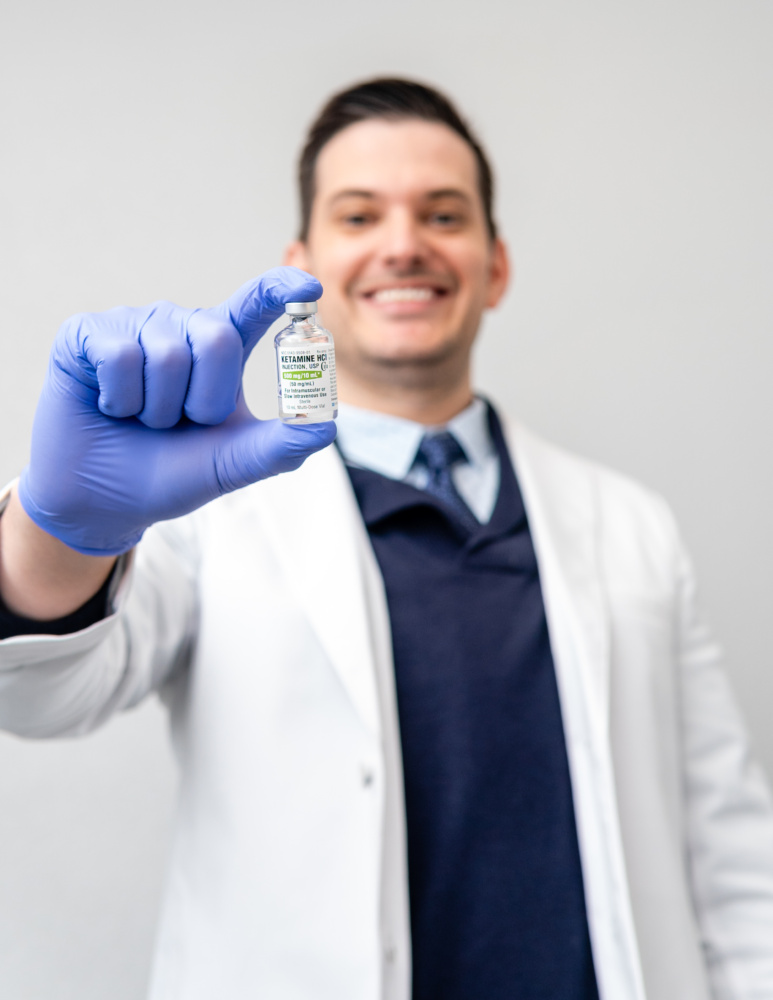 Dr. Johnston, of Phoenix Mental Health, holds up a vial of Ketamine, which is used to treat ongoing mental health issues as well as provide immediate relief for acute mental health episodes.

Dr. Johnston recalls a moment of pure terror turned into pure bliss. A patient of his had suicidal thoughts and ideation to the point where there was a legitimate plan in place to end their own life. After one treatment on ketamine, those thoughts were gone. Now, this is no cure-all and the ketamine therapy continued for a number of weeks afterward. But on that day a life was saved… and hope restored.

Anyone involved in Mental Health, patient or practitioner, knows that it is about winning each day; Not looking too far in the future, but rather being the buffalo, running towards the storm, confronting it and thus becoming stronger, more resilient, and reborn each day into the phoenix that will face adversity with courage and hope.

If you or someone you know has been struggling with a mental health issue and feel that every healthy option has been considered, tried, reconsidered, tried again a different way, and yet failed, give the friendly staff at Phoenix Mental Health an opportunity to be your ally in a never-ending battle.

If you’re in the San Antonio area and are interested in the treatment options, call Phoenix Mental Health at +1 (210) 966-8402 or visit their website by clicking here.

You can also find Phoenix Mental Health on Facebook, here.

If you want to see what getting Deep TMS is like at Phoenix Mental Health, you can follow the story of one patient by clicking here.