Collectively, all three have overseen the delivery of tens of thousands of children, including those born prematurely. The WHR NICU, a member of the Vermont Oxford Network quality improvement database, has tracked every baby admitted to its NICU over the last 10 years. Constant quality improvement measures have led to better outcomes and improved the odds of parents bringing home a healthy baby, especially a preemie, in the Rio Grande Valley.

“The outcomes at the WHR neonatal intensive care unit are at the top ten percent of Vermont Oxford’s Network for most of the indices reported,” said Milano. 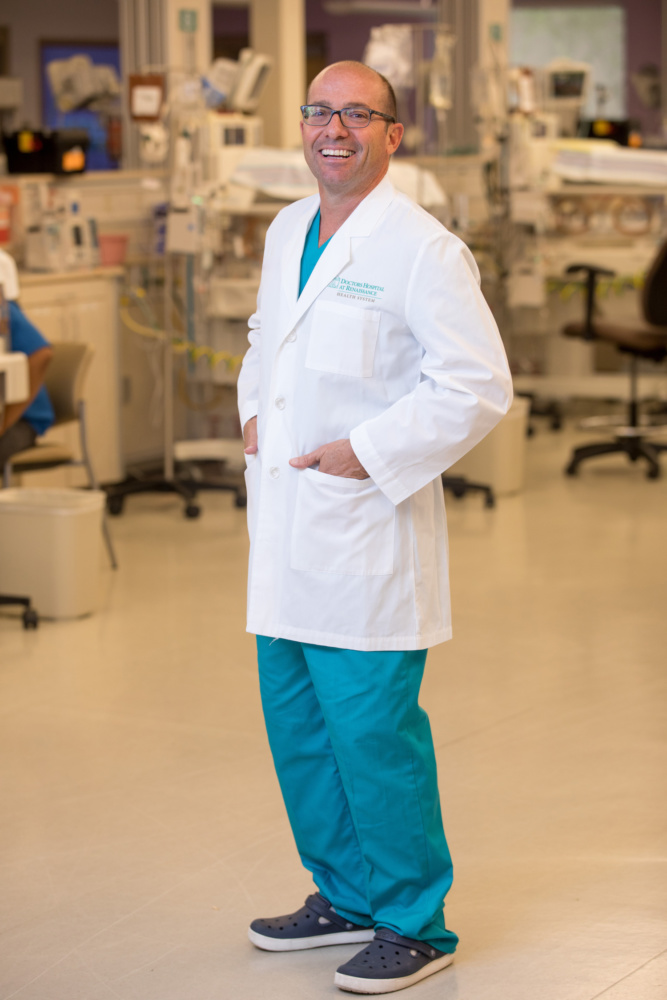 Historically, all community NICU’s in the United States lacked subspecialists and comprehensive infrastructure that are critical for supporting particularly high-risk infants in the vital first few hours and days of their lives. The Women’s Hospital at Renaissance has worked to solve that problem locally: providing state of the art technology and subspecialized neonatal nursing and medical care. Previously, many patients who had high risk pregnancies and threatened with extreme premature labor would leave the Valley to deliver in San Antonio or Houston.

The Women’s Hospital at Renaissance changed that, not only in the provision of compassionate, all-around care, but also changing the perception within the community that high acuity neonatal care was best provided outside of the Valley. “I came to the Valley, in particular, to care for underserved families. Families who could not afford to travel far distances for their medical care,” Honrubia said of parents who may not have had the resources to transfer to another facility. A Los Angeles native, Honrubia earned his medical degree from the David Geffen School of Medicine at UCLA, performed residency training at UCLA/Cedars-Sinai Medical Center, and completed his Neonatal-Perinatal Medicine fellowship at Harvard Medical School and Boston Children’s Hospital.

Dr. Honrubia’s decision to become a physician began after he volunteered at the Venice Family Clinic’s homeless pediatric clinic, providing care to homeless families. Honrubia was struck by the resiliency and strength of children who lacked a roof over their head.

“The free clinic experience was extraordinary. Homeless children and homeless moms were bright, caring, very underserved; absolutely beautiful to help care for,” he said. Honrubia practiced neonatology long before he arrived in South Texas to join his brother, Dr Vincent Honrubia, an Otorhinolaryngologist in McAllen. Dr. Honrubia believed that, despite the area’s quite comprehensive and well ran NICUs, expectant parents were missing outcomes- driven clinical care. “A NICU that was technologically state of the art, outcomes-driven using networks like Vermont Oxford, and evidenced-based needed to be built for the Valley residents,” he stated.

“Families that needed higher levels of care prompted many transfers to another city,” added Milano, a Weslaco native who earned his medical degree from Universidad de Monterrey in Monterrey, Mexico. Milano has practiced medicine for more than 20 years, with much time spent in the Corpus Christi area. As physicians such as Honrubia and Milano arrived in Edinburg, there was an influx of subspecialists and other support staff who could give crucial, comprehensive neonatal care.

“I think that (public) trust was gained mostly because of the subspecialists moving here to work at Women’s Hospital at Renaissance,” Milano said.

The sub-specialists focus on a variety of conditions and afflictions. Milano, Honrubia, Swarup and their colleagues have also developed a self-sustaining system of support for not only the sub-specialists in the NICU but for the nurses, fine-tuning and expanding their neonatal care skill set.

“We came here to the NICU and built it from nothing,” Milano said of the opening of WHR. “Some of the NICU staff was trained up from ground zero.”

“It’s an extraordinary place and it’s not just physicians. It’s the nurses, housekeepers, lab techs – everybody makes the place work,” said Honrubia. “The hospital deserves a lot of credit. They’ve been truly supportive of the mission.” Ten years since the Women’s Hospital at Renaissance opened, neonatal care for Rio Grande Valley expectant mothers has “evolved into outstanding, comprehensive perinatal care,” added Milano. “And it’s something the community, over time, comes to appreciate what you’ve built.”

other medical facilities due to their lack of citizen documentation.

“The last thing you want to do is separate a newborn from their mother,” Swarup said. “It’s an extremely wonderful thing to see them stay together.” In addition to an increase in skilled, experienced professionals and advanced technologies, research and collaboration have helped to make the NICU at the Women’s Hospital at Renaissance unique.

The Women’s Hospital at Renaissance is a member of the Vermont Oxford Network, a nonprofit health care exchange that administers one of the biggest neonatal databases in the world. It contains outcomes for high-risk infants from more than 850 NICUs worldwide, with more than half of those in the United States. “Each year we submit our morbidity and mortality data to the network,” Milano said. The data includes outcomes primarily of preterm infants admitted to the NICU.

The Women’s Hospital at Renaissance NICU data is compared with that from other neonatal intensive care facilities of similar size and acuity classification. The outcomes at the WHR neonatal intensive care unit are at the top ten percent of Vermont Oxford’s Network for most of the indices reported, Milano said. Milano explained that the shared data can show where the Women’s Hospital NICU can improve, or where the facility is highly successful and how that can be possibly applied to other facilities.

Constant quality improvement measures have led to better outcomes and improved the odds of parents bringing home a healthy baby, especially a preemie, in the Rio Grande Valley.

“Our outcomes are great. Mortality rate for low birthweight babies is 3 percent to 5 percent a year,” Honrubia said, adding that the same annual rate is higher at similar facilities in the network. Honrubia said the morbidity rate is also low in several categories at the Women’s Hospital at Renaissance.

“We’ve had no deafness or blindness because of premature birth, for example,” he said. The NICU is currently classified as Level IIIC, meaning it is able to care for the most complex and critically sick patients, thanks to immediate, on-site presence of pediatric medical subspecialty professionals. 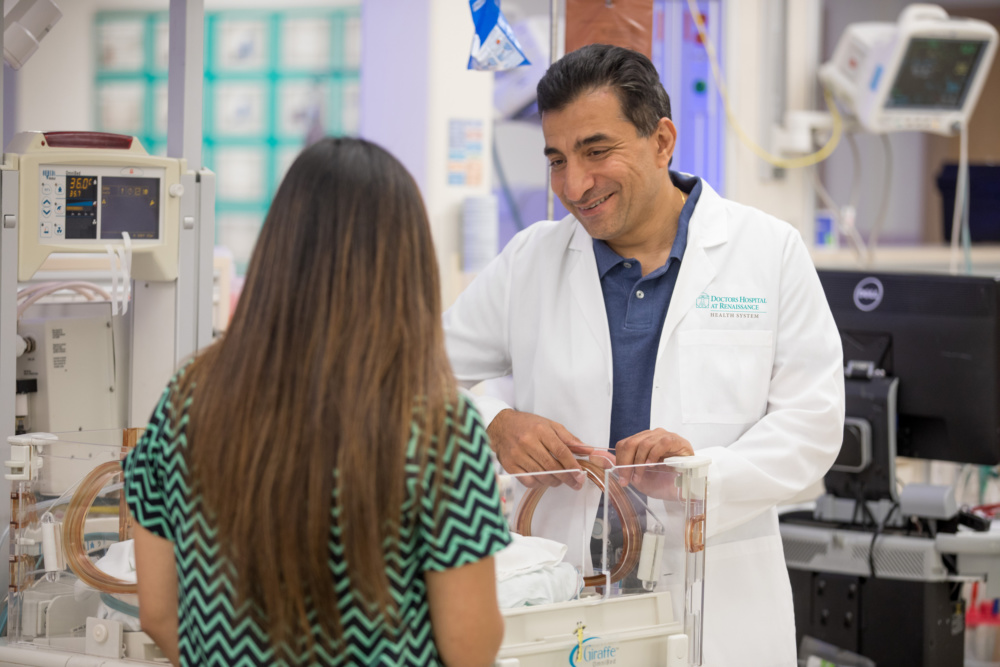 The Women’s Hospital at Renaissance NICU, like a few other Level IIIC facilities nationwide, is working towards a Level IV designation and is awaiting formal certification. Level IV facilities have a full gamut of pediatric medical and surgical subspecialities in addition to on-site pediatric anesthesiologists. Neurosurgery is available, but not open heart surgery. Level IV NICUs can also provide transport and educational outreach.

According to Milano, being this prepared absolutely makes a difference in the care for a preemie. “One of the most common problems seen in many premature infants can be some form of respiratory distress,” Milano said, adding that the NICU team of neonatal nurses, neonatal nurse practitioners, respiratory therapists and neonatologists is prepared to assess and manage this condition each and every day.

The high incidences of maternal diabetes and hypertension are two other health conditions prevalent in the Rio Grande Valley that pose a challenge when caring for the mother and also the subsequent provision of perinatal and neonatal care. Milano said he treated many infants born to diabetic and hypertensive mothers outside the Rio Grande Valley, but these health problems are much more prevalent and pronounced here. These maternal medical conditions can have a serious impact on not only the mother but also on the unborn fetus and thereafter the neonate. Out of the more than 8,000 to 10, 000 babies delivered each year at the Women’s Hospital at Renaissance, fewer than 50 are transferred out for conditions not yet treatable in the Valley. That’s how solid the hospital and the NICU have been performing. The Women’s Hospital at Renaissance is the only facility in the region that carefully tracks its former NICU patients, and tracks their progress at specific times of their life up until four years of age (through a NICU High Risk Follow-Up Program).

“When you see bright, beautiful kids, it makes us feel like we’re making a big difference,” said Swarup.

The Women’s Hospital at Renaissance also furthers research. They are involved in ongoing studies, such as those related to maternal steroids and improving nutrition of low birthweight babies. WHR plans to participate in the development of a vaccine against RSV (Respiratory Syncytial Virus), an illness that impacts the respiratory tract of most children before their second birthday, which can be extremely harmful to an infant born prematurely. The Women’s Hospital at Renaissance is taking part in a pilot project looking into how the drug Avastin could help treat retinopathy of prematurity.

“We’re not just practicing medicine, we’re pushing the envelope of medicine,” Honrubia said. The Women’s Hospital at Renaissance gives back to the community in a different way, too. It has a neonatal reading program where new mothers read a book to their newborn to bond with the child in the hospital, and to foster neurodevelopment. The WHR NICU recently opened a 5,000 book library in honor of one of its former patients. The books were donated by community members at the behest of the child’s mother. Upon being discharged, the parents and their newborn(s) can take a book back home.

“Many of our mothers come from underserved areas. So, we’re now filling their homes with books,” said Honrubia. The physicians leading the NICU at the Women’s Hospital at Renaissance said their hard work is worthwhile upon seeing their patients happy leaving for home. “When you see bright, beautiful kids, it makes us feel like we’re making a big difference,” said Swarup.

For more information on the NICU team at Doctors Hospital at Renaissance, please visit www.dhr-rgv.com.